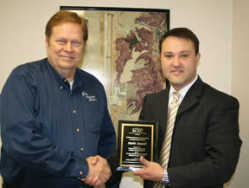 Mike Clodfelter, president of the Putnam County Board of Aviation Commissioners, accepted a plaque from Paul A. Shaffer, Butler Fairman Seufert Civil Engineers for the Engineering Excellence Award.

The plaque recognized the Runway 18-36 Parallel Taxiway project, which consisted of building a full parallel taxiway system for the Putnam County Airport.

"Vital safety enhancements were the driving force behind this taxiway construction," stated Board Commissioner JR Scott.

Innovative wetland banking was used to mitigate several acres of wetland, 130,000 cubic yards of embankment was constructed and the airfield was equipped with a state of the art LED taxiway lighting system.

The efforts of BF&S included grant administration, environmental permitting, study, design and construction inspection of all phases of the project.

The project was constructed in three phases: The first phase included grading and drainage.

Funding for the project was made possible through the FAA Airport Improvement Program grants. The parallel taxiway was issued its certificate of substantial completion on June 25, 2007.

In other business the commissioners welcomed Vernon Bothwell, Jr. and JR Scott who will be filling vacant positions on the board left by John Monnett and John Sturgeon.