CLOVERDALE -- Trailing 2-0 after three innings, it looked like South Putnam softball might be in trouble Wednesday night at Cloverdale. On Monday, the two teams had battled in a scoreless game until South won it in the bottom of the seventh inning with a single run.

A two-run lead seemed huge in that light.

It was the Clovers who were in trouble, though, as senior pitcher Nicole Mowery sustained a hand injury and allowed six runs in the top of the fourth.

That was only the beginning, though, as Clover relievers Elizabeth Wiley and Jennifer Wiley allowed 12 more Eagle runs.

In the end, South had an 18-6 victory, a far cry from Monday's pitchers' duel.

South Putnam coach Evonne Canary was pleased with the offensive outburst from her Eagles (2-0, 2-0 WCC). 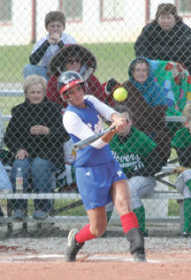 As the Cloverdale faithful look on, South Putnam's Meghan Canary drives in the first of the Eagles' 18 runs Wednesday night.

"I think it definitely gives them confidence in what they're able to do. We actually did struggle some in getting the ball in play the first night and had a little better opportunity of that tonight," Canary said. "Any time you can put the ball in play, it's an asset."

An Oceaia Boetjer RBI in the top of the fourth tied the game. Alex Boyce drove Boetjer in three batters later to give the Eagles the lead.

In the next inning, Boyce once again drove in Boetjer to make the score 7-2, a run that was ultimately the winner for the Eagles.

"I think it's a real confidence booster for the girls. They came in off of a long spring break and some bad weather, so they really haven't had an opportunity to get out there and practice really hard. I'm proud of them," Canary said.

Boetjer, who relieved starter Samantha Tomasino in the third inning, also earned the win for the Eagles.

For new Cloverdale coach Stacey Falls, the loss is a matter of keeping things in perspective. Cloverdale (0-2, 0-2 WCC) struggled to a 6-19 record last season and are having to learn a new system this spring. They stood toe-to-toe with the Eagles on Monday and looked impressive on Wednesday until Mowery's injury.

"I think they turned a lot of heads on Monday and I think that's what their intent is still to do," Falls said. "When we're inexperienced in a lot of the things that I'm asking them to do--we have a lot of new left-handed batters--of course we're going to have off nights. But we're going to pick it up and go from there.

Even in Wednesday's game, Falls used it as a time to experiment once things started to get out of hand.

"We can look at it as an advantage or a disadvantage. The advantage is that later down the road, we got a lot of looks and worked on a lot of things that normally in a big game when it's 0-0, you're not going to take advantage of," Falls said.

"They're competitors. They want to win. They're in the mindset that they can, so I think that's the most important thing for us right now. They are starting to believe," she continued.

While the Eagles return plenty of experience, they also have some young talent. Canary was happy with the confidence they gained Wednesday, but knows there is more work to do.

"We've got a lot of improving we need to do as far as errors and knowing what we need to do. For the most part, I thought they did a good job. They stayed up, especially in the first game. They stayed composed and were able to battle back."