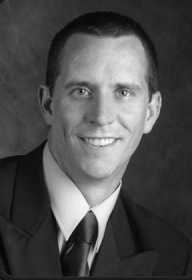 Jeremy Carver has announced his candidacy for an At-Large seat on the County Council on the Republican ticket in May's primary.

Carver grew up in Hendricks County and has lived and worked in Putnam County for the past four years. He resides on the south side of Greencastle.

A graduate of Ben Davis High School and Ivy Tech State College, he attends Hazelwood Christian Church and is a member of the Greencastle Chamber of Commerce. He is also a member of the Moose Lodge.

He has two daughters, a five-year-old and three-year-old.

Carver says he is committed to strict oversight of how money is spent by various county departments. He says he believes there should be more scrutiny over budgets and a reform of local government.

He also says he is committed to fighting any implementation of a Local Option Income Tax (LOIT) and instead will fight for real tax reform and spending controls.

Carver says he recognizes the importance of an economic plan that is both progressive and innovative in bringing new opportunities to Putnam County.

He also says he knows the importance of controlled growth and land use regulation in Putnam County.

Craver says he wants to work for the residents for a better Putnam County. He adds, "the future is ours to shape. Sure we have a nice country, but why not strive for a great county?

"Let's not settle for good enough -- we can do better, and with your support we will do just that."