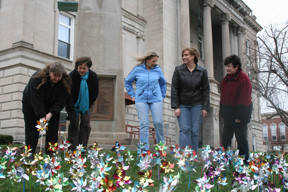 April is Child Abuse Prevention Month, a time when children's advocates across the country call for action to address abuse and neglect.

Representatives from several service agencies took time Tuesday afternoon to place pinwheels on the southeast lawn of the Putnam County Courthouse representing the 142 children who were neglected or abused in Putnam County last year.

Nationwide more than 84,000 children were reported as victims of child abuse and neglect.

This month is dedicated to drawing attention to the problem and preventing any child abuse or neglect from taking place.

According to Cari Cox, Family Support Services, abuse and neglect have both long and short-term consequences.

Survivors of child abuse and neglect may also be at greater risk for problems later in life.

Prevent Child Abuse Indiana released information that states 90 percent of incarcerated male felons have child abuse histories and 95 percent of arrested teen prostitutes have records of abuse, often sexual abuse, and 13 percent of all violence can be linked to earlier child abuse or neglect.

* Increase awareness of the problem and inform communities about solutions

*Serve as a valuable resource for families, individuals and organizations

According to Cox, warning signs of abuse or neglect often include frequent or unexplained bruises or injuries, nervousness around adults, aggression toward adults or other children, an inability to stay awake or concentrate for extended periods, a sudden, dramatic change in activities or personality and acting out sexually.

Putnam County planned activities for this month include:

* April 1, Putnam County Families Matters members put up a display on the courthouse lawn depicting the number of children who died last year from abuse.

* April 14 to April 18 is Blue Ribbon Week, in which anyone can sport a blue ribbon reminding others to help protect children.

* April 22 a candlelight vigil will take place at Gobin Methodist Church at 5:30 p.m.

Elsewhere in the state:

*Thursday, April 3, 2008 from 4:00 P.M. - 8:00 P.M. visit the Indianapolis Children's Museum for the "Born Learning" Family Celebration. Admission is free for the entire family.