Pipeline could take a toll on endangered bat 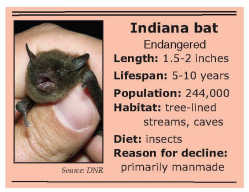 The proposed natural gas pipeline to run through Putnam County has encountered a possible environmental issue.

The Indiana bat, a federally endangered mammal, spends the summer months in the loose bark of trees. The maternal colonies, consisting of around 50 females, return to the same area year after year to raise their young. This is where the new pipeline project comes in.

Rockies Express' (REX) proposed pipeline project would need to clear some trees that may be the summer roost of the endangered bat, and this could include areas along Big Walnunt Creek near Bainbridge.

Allen Fore, REX spokesman, said, "The Indiana bat is all part of the surveying process and we are still going through specific measures designed to minimize the impact on the habitat."

The environmental impact survey is being conducted by the federal government, however, there is no final report out at this time.

Scott Johnson, Department of Natural Resources Fish and Wildlife Unit in Bloomington said, "The entire state is seen as a suitable habitat (for the bat)."

Johnson also stated that since the bats make their colonies in the loose bark of trees that are prone to rotting, falling down and various other naturally occurring events, the bats need many roosting possibilities.

It is only in the summer months when the bats are in their migratory phase that they are to be found in Putnam County. They hibernate in caves and mines in the southern part of Indiana as well as Kentucky Missouri and some parts of the Appalachian Mountains.

"They need specific conditions to hibernate, so during that time, large clusters of bats are in a small area. Any sort of variation in those areas impacts the bats greatly," Johnson added.

In its review of the pipeline project last year, the Federal Energy Regulatory Commission (FERC) noted several wildlife with habitats in Putnam County. They included the Indiana bat and the bald eagle.

FERC noted that there are bald eagles nests along Big Walnut Creek and that REX should do all it can to protect those sites. FERC has recommended that REX officials identify all the nesting sites in the area of the pipeline.

Further, they recommended that REX limit disruptions to the nest from February to July, the time when eagles are actively preparing nests or rearing their young.

REX is proposing to burn the trees and brush it cuts during the construction of the pipeline, onsite. FERC has specified that REX is not to burn brush near known Indiana bat habitats. Also, they cannot work at dusk or dawn, as this is the time when the bats are actively flying, the FERC report states.

REX has also been instructed, according to the FERC report, not to use herbicides or pesticides, for the life of the project, to maintain permanent rights-of-way for the pipeline.

The Indiana bat derives its name due to it being discovered as a separate species in 1928 in Wyandotte Cave.

More than 800 miles of the pipeline is already functional between Colorado and Missouri. The pipeline is being constructed in three legs: West, Entrega and East. Putnam County falls under the eastern leg that stretches from Missouri to eastern Ohio.

Fore said he believed that if they acquire all federal approvals, they will begin construction in Putnam County in June. To date, no construction has begun on the Eastern leg. When the entire pipeline project is completed it will stretch from Rio Blanco County, Colorado to Monroe County, Ohio.

REX is also hoping to build a compressor facility near Bainbridge. According to Fore, the facility is a $30 million project with an expected tax revenue of $500,000.