CLOVERDALE -- Looking out the window from their classrooms on Thursday afternoon, most of the golfers in the Putnam County Tournament likely thought they would not be playing golf that evening. 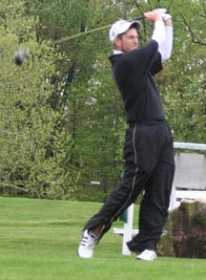 This made North Putnam's winning score of 155, the best winning score in five years, even more remarkable. Not only did the golfers have to deal with the wet, chilly conditions at Clover Meadows, they also had the surprise that they were even playing.

"We watched it rain all day long. The way it was pouring about 2 o'clock, we never thought we'd play today," Cougar coach Dave Fox said.

The other coaches all had good things to say about the Cougars' performance.

"I'm really glad to see someone, after the last few years, finally win it with a score like a 155. It's nice to see someone come out and just take it. Congratulations to them," Greencastle coach Donovan Wheeler said.

Greencastle placed second with a 160. Cloverdale was next with a 169 and South Putnam was fourth with 188.

The highlight of the night came late, with darkness approaching and the rain getting heavier. North's J.J. Burns and Greencastle's Eric Davis had tied for medalist with a 37.

Replaying No. 18 in a one-hole playoff, Burns had already watched Davis put his chip safely on the green for a par putt. Burns chose that moment to make the shot of the day, chipping in for birdie and the individual tournament title.

The senior threw both arms in the air, happy not only with the win, but also with the chance to get in out of the rain.

"I was just glad that I didn't have to go play another hole," Burns said with a smile. "That was the first good chip I hit all day. I was pretty happy."

But self-criticism aside, Burns's short game had gotten him in that position in the first place.

"I just putted well today. I had to scramble a lot and I was fortunate to get up and down quite a bit, even though I missed the greens," he commented.

On the way to the title, the Cougars had four All-County performers. Burns was joined by matching 39s from Patrick Byrd and Adam Vondersaar and Austin Malayer's 40. Jeremy Redman shot a 44, finishing outside the scoring.

Fox thought Wednesday's rainy practice at Clover Meadows paid off for his squad.

"We came out last night and played in the rain. The boys were nice and loose and played well. I kind of had a feeling that they'd start coming together right now," Fox said. "Hopefully we can keep this going and play pretty good at conference."

Looking toward conference, the coach saw a few things that needed work, but hope his team just keeps it rolling.

"I saw a few missed putts. I saw a few drives go a little skyward. But all in all, the kids are playing pretty well right now. They're doing all right," Fox concluded. 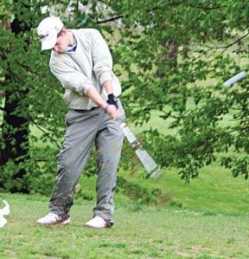 Greencastle senior Eric Davis fires a drive on No. 14 at Clover Meadows Thursday night during the Putnam County Tournament. Davis finished the night with a 37 while the Tiger Cubs placed second with 160 strokes.

Greencastle's 160 was anchored by Davis' 37 and another All-County performance in Nick Pritchard's 39. Wade Huber was next with a 41 and Luke Crimmins closed out the scoring with a 43. Jacob Collins also had a 45.

Wheeler could not hide his displeasure with the team's performance.

"I'm disappointed but I'm not going to say that I'm surprised because our ability to compete mentally has been our problem all year long," Wheeler said. "Tonight was simply a focus issue."

Wheeler went on to site specific problems during the night that led to his team's finish. However, it all came down to one issue.

"It's focus. It's about the ability to block out everything else that's going on and the ability to simply focus on the shot at hand. That has been our problem all year long," Wheeler said. "We're a talented team, but we are not very good mentally. We let our emotions get a hold of us."

For Cloverdale, the low scores came from its less experienced players, with freshman Chris Arnold firing a 39 and junior Mike Wellington shooting a 40. Both made All-County. Blake Witt added a very respectable 43.

Wokoun was happy with the good performances and confident on the seniors' ability to be back in form for Saturday's conference meet.

"Our three young guys played very well today. We're really heartened by that," Wokoun said. "We're going to regroup and come back on Saturday to play conference. Our top guys will bounce back. They're good golfers, so we're looking forward to Saturday."

While the tournament was played on his team's home course, Wokoun said he thought the other teams had done a good job of learning the course after practice sessions in the rain Wednesday.

"There are a lot of good golfers in this tournament and I think a lot of guys understood how they had to play today and they just got out and got it done," Wokoun concluded.

For South Putnam, the lone All-County score came from Tyler Newby with a 40. Dylan Gilbert was next with a 47 and Tyler Shoffner added a 50. Matt Huck had a 53.

Ricke didn't think the conditions were so much a problem for his team as much as simple consistency.

"I would grade us as 'fair' for the night. We did an okay job adjusting to the conditions," Ricke said. "We were kind of erratic with our golf out there today. Guys might birdie one hole and triple bogey the next hole.

"I think we made some poor decisions off the tee here and there that got us in trouble," he continued. "Those kind of had a domino effect that led to some later problems. Overall, we're still young and we just have to figure out how to play in these tough conditions."

The Eagles are still dealing with their youth, so Ricke was curious to see how they would deal with their first big tournament.

"The first tee shot on 10 was about as nerve-wracking as these guys have ever had to hit a shot before," Ricke said. "Certainly we'll learn a lot from it. I think they'll be more confident."

All four teams compete in the West Central Conference Tournament Saturday at Deer Creek. Although he was trying to challenge his own squad, Wheeler gave the approach any team will need to follow to victory.

"We're either going to compete with the intent to win or we're going to go out and just hope to play average and hope everybody else does a little worse. That isn't going to get the job done most of the time," Wheeler said.

The WCC Tournament tees off at 11 a.m. Saturday.

Next match -- All four Putnam County teams will be in action at the WCC Tournament at 11 a.m. Saturday at Deer Creek.