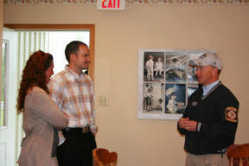 Angela Timm was awarded "Small Business Person of the Year" in Indiana and also was recognized by President Bush as being runner-up Small Business Owner of the year nationally.

Cottage Gardens was created back in 1996 and moved to its current location in Bainbridge in 2001.

The Timms gave Daniels two of their patented music boxes. One was a custom made box that had a picture of a Putnam County Covered Bridge with a sign posted on a tree that read, "My Man Mitch."

The second was a drawing of the past seven Republican Presidents playing poker. More on the Timms will be printed in the Monday, May 19 edition.