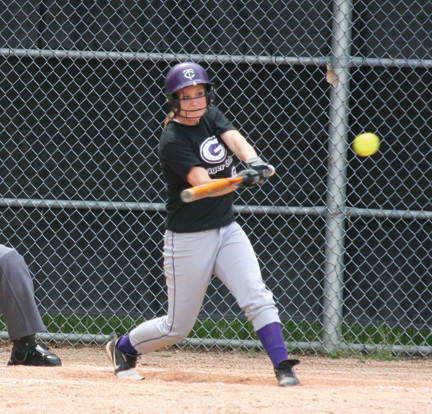 Mallory Miller sends a ball to the left side of the infield to drive in a Greencastle run in the fifth inning.

Since coach Dave Keller took over the Greencastle softball program at the beginning of last season, the Tiger Cubs have steadily improved. Sitting at 11-7 entering Saturday's championship of the Putnam County Tournament, the Tiger Cubs had already proven they were a far cry from last season's five wins.

However, two of those seven losses had come last week to South Putnam, their opponent in Saturday's final game.

Greencastle's 5-3 win over the Eagles (15-3) not only avenged those two losses, but left the GHS players able to call themselves something they haven't in a long time -- Putnam County Champions.

"This is the first County Championship in a long time for Greencastle. I can't tell you the last time. I'm awful proud of them," Keller said.

Greencastle advanced to the championship with a 3-1 win over North Putnam in the tournament opener. South followed with a 5-0 win against Cloverdale.

Asked if he thought one year ago that his team could be here, Keller said he did, but it was about getting the players to believe.

"I had high hopes that we would do it and just tried to get the girls to believe in the same way, that anything's possible if they work hard at it. And they've worked really hard," Keller said.

"Yeah, I thought we could do it. If I didn't, I'd be the wrong guy for the job," he continued.

Based on his players' comments, Keller has a dugout full of believers.

"Winning's always great. Our team's worked really hard," junior shortstop Hannah Spencer said. "We've come so far since the beginning of the season. Today we were hitting well. We played great defense. In the beginning, we had trouble hitting cutoffs. And today, we were great. It was really fun to see us all finally coming together and just hitting our stride at the right time."

Freshman Mallory Miller said she was proud to have helped a program improve so much.

"It's an honor being able to bring a team back up. It's pretty exciting," Miller said.

Sophomore Veronica Sawyer said she plans to keep getting better.

"We're young. I think that we'll keep up the work and keep winning more and more," she commented.

When Greencastle (12-7) has struggled this year, it has often been at the plate. They showed early this would not be a problem on Saturday.

Cassie Alspaugh got things started with a one-out double. Miller followed with an infield single. Two batters later, Sawyer connected on a big two-out double to plate both runners.

GHS led 2-0 after the first inning.

"The two-out double by Veronica broke the ice and took a little of the edge off. If we start out in the hole 2-0, it seems like you're fighting an uphill battle all along. But we had a little bit of cushion to work with," Keller said.

The Eagles battled back, though, holding Greencastle scoreless for the next three innings. In the third, they got on the board themselves when Sam Stanifer sent a double to left field to drive in Alex Boyce.

They struck again in the fourth when Katelyn Sibbitt led off the inning with a solo home run to tie the score at two.

One key to the Eagles' resurgence was the pitching of Oceaia Boetjer, who had relieved starter Sam Tomasino after two innings. Boetjer was perfect through her first two innings of work.

But the GHS offense struck again in the fifth. Briana Baker opened the frame with a walk. Sam Rising then reached on a fielding error. Spencer drove in Baker with a single. Two batters later, Miller drove in Rising on another error.

The two errors in the fifth were the only ones South committed all afternoon, but they were costly, as GHS went back up 4-2.

Another key development in the fifth was Baker replacing Miller as pitcher.

"Mallory was throwing just well enough to keep us in the ball game until we got our bats going. And she did. Then I decided to bring in Bri and then our bats started going and we got our confidence up."

GHS added an additional insurance run in the sixth when Kayla Nobles drove in Sawyer with a single.

Not to be lost in the talk of offense and pitching, though, is some good fielding by GHS. The two pitchers combined for just one strikeout, leaving the fielders to make 20 outs themselves. They did so, committing just one error in the process.

Eagle coach Evonne Canary had little to say after the gave, except to express her displeasure with a call late in the game and to commend her team for staying in the game after trailing early.

"I thought they battled back. That's about all I've got to say," Canary said.

"We took a couple of tough losses on the chin this week against South. And we left here Tuesday night with everything in mind that we were going to come back and play and give everything that we had today. From one player to the next, there was that thought. I think that's why we came out on top -- we believed," Keller concluded.