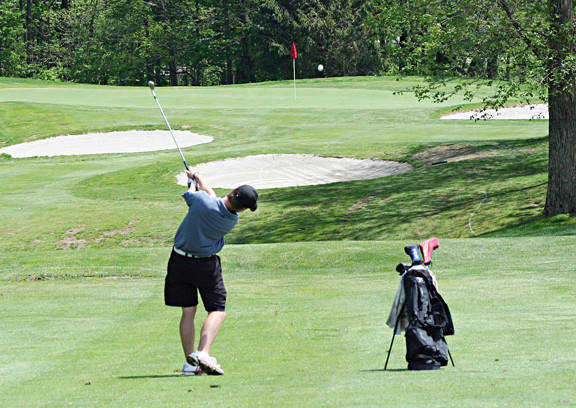 Greencastle senior Eric Davis launches an approach to the No. 4 green at Deer Creek G.C. during Saturday's WCC tournament. The Tiger Cubs won the conference title, while Davis finished in third place individually.

CLAYTON -- Saturday was anything but a typical day at the West Central Conference Tournament held at Deer Creek G.C. There were strokes added to scores, clubs snapped in two and a No. 4 golfer taking the field by storm to win medalist honors.

In the seven-team field, Greencastle took the top spot, scoring a 326. North Putnam was second with 336, Cloverdale tied for third with 342 and South Putnam placed fifth with a 379.

Greencastle coach Donovan Wheeler has been first in line to be critical of the Tiger Cubs play this season but on Saturday, he was first to give kudos to his squad.

"I'm humbled because those kids… I'm just really proud of them," a visably pleased Wheeler said.

He said that the team shot what he expected but what he didn't expect was the outcome. Wheeler was convinced that he would be talking to a second place finishing team after the contest. Instead his team strolled to their bus with the Putnam County Bucket held high and the WCC title under their belts.

"So if you would have told me the door would get opened as wide as it was and it would give us a chance to do what we did, I would have said no way," Wheeler explained. "But, were going to take it."

Luke Crimmins made the turn Saturday and posted a 37 to share the front nine lead with fellow county striker Michael Glassburn of Cloverdale. After the meet, a discrepancy on the scorecard, led to Glassburn having two strokes added to his score.

As the golfers started trickling in off the back nine, it was apparent it was going to come down to GHS and North Putnam. The Cougars were within striking distance as the scores began to be posted, but scores in the 30s from Crimmins and Davis put GHS over the top.

Greencastle had three players make the All-Conference team. Wade Huber joined Crimmins and Davis on the team after posting an 85.

Following the golfers, it was apparent that the Greencastle squad was loose. Relaxed walks and easy grins, even after poor shot, left one to wonder what the Tiger Cubs had up their sleeves. It turns out that the change was a weight lifted off their shoulder from a pre-match talk from their head coach.

"That was our themes today. I told every one of them when we got off the bus, I just want you to know, I'm not going to needle you and I'm not going to nitpick you tonight when we get on the bus. Whatever happens, happens and you know, we didn't shoot lights out but we put up a score I'm proud of. I was going to be pleased with this score, but I'm ecstatic considering the circumstances," Wheeler said.

The frustration with their play was apparent on the faces of the North Putnam players; most of all, No. 1 golfer J.J. Burns and their head coach Dave Fox. After congratulating Greencastle's head coach, Burns stood staring at the leaderboard until the team departed.

Fox attributed their play to a lack of focus but assured that would not be a factor once sectional play tees off in a week.

"They didn't come to play," Fox commented. "They won county, they were sky high and they were ready to skip playing and just come get the medals. They have to put their concentration and focus back in."

In addition to Burns, Patrick Byrd's 83 was good enough to place him on the All-Conference team.

Cloverdale played a strong round to place third for the day. Superb play from Glassburn and a solid round from freshman Chris Arnold help pick the Clovers up from last Thursday's tournament.

"I'm very pleased with Michael particularly because Thursday night was such a train wreck for him," CHS head coach Doug Wokoun said. "He only had 36 hours to get it together and he did a fabulous job.

"Chris had a great day. Our other guys didn't play badly but we got bit in some places today and we weren't able to get around it," he added.

Glassburn and Arnold made the All-Conference squad.

It wasn't difficult to see the disappointment on the face of South Putnam head coach Scott Ricke. His Eagles squad is a group of talented golfers but their inexperience hinders their progression. Senior Tyler Newby who shot an 83 and earn All-Conference status led them.

Looking back on the WCC match, Ricke was unsatisfied with his team performance and vowed that they would be hitting the range hard to prepare for sectional.

"(It was) Kind of disappointing overall -- didn't play very well at all," Ricke replied. "We had some rough front nine scores. I don't feel like we mentally rebounded on the back either. We have some work to do out there on the range this week."

When asked about a strategy for the time leading up to sectional, Ricke just wants his team to play to their ability. If that happens, he believes the Eagles will end their season on solid ground.

"I'm looking for a new few guys to step up and come into their roles because I don't feel we're playing to our potential. We have to up the effort," Ricke said.

Sectional play was a hot topic among the coaches, each with a different mindset as they prepare.

For Greencastle it's a simple cast of sustaining momentum. They shot well at the WCC but Wheeler acknowledged the fact the Cougars played a subpar round; something he doesn't expect them to repeat.

"The first thing I'll say is that there's no way North Putnam is going to let that happen again," he assured. "They're going to come back three times as focused, so if we want to repeat what happened at sectional, it's going to have to happen like it did last year. We're going to have to play the best we can possible play.

"That' fine -- that's the way I want it. It's going to be very competitive," Wheeler concluded.

Wokoun was confident after the round that the Clovers were poised to be able to do some damage in the sectional.

"One of the things is that we competed pretty well today," he said. "We beat Brownsburg in their tournament and they've been a regional team for several years in a row. I think there are two teams that are the front-runner in the sectional and then the rest of us."

For the Cougars, Fox believes Saturday's performance was just a slight stumble for his team. He also gave a quick history lesson he hopes repeats itself in the near future.

"I think we're going to absolutely build from this. We'll talk about this a little bit then we'll put this whole thing behind us," Fox said. "If you think back about last year, it was just a flip-flop of exactly what happened. The team that won county lost conference but got out of sectional.

I hope it works that same way this year," Fox laughed.