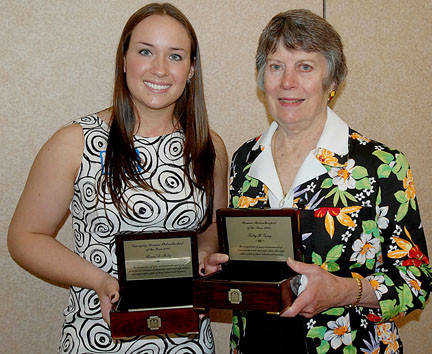 Lynn Bohmer, past president of the community foundation board, presented the awards to Gray and Foltz. Foundation director Elaine Peck said the awards were really Bohmer's idea.

"She started talking about doing this back in 2005," Peck said.

Gray, who has lived in Greencastle since 1965, was a professor of economics before she went to law school. She founded the local Prevention, Intervention and Education Coalition to fight substance abuse, and was also involved in the development of Putnam County's Community Corrections Office and Substance Abuse Treatment Program. She established an endowment at the foundation that provides financial support for local substance abuse treatments programs.

For the past several years, Gray has been on the board of the Putnam County Museum. She has worked tirelessly to raise funds for the museum, and has made a commitment to match contributions to the museum's endowment at the Putnam County Community Foundation.

"I've always said the women of this community are a secret weapon," Gray said.

She serves as president of North Putnam's chapter of Students Against Drunk Driving, and volunteers to help with fundraising for Riley Children's Hospital in Indianapolis.

Nominations for the awards were only accepted from other women, and the women on the foundation board selected the winners.

"This is the first time we've done this, but it won't be the last," Bohmer said.

Before announcing Gray as an award winner, Bohmer read from Gray's nomination form, which spoke of Gray's "cheerful, giving spirit."

Bohmer said she was deeply impressed with the three younger finalists.

"They have really shown a commitment to community at a very young age," she said.

"If we can start them this young, who knows what they'll achieve by the time they're my age," she said.