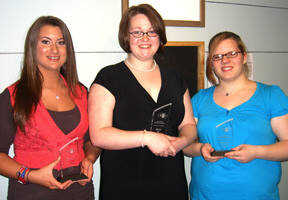 Liz Poor's oil painting "Mallory" was named best in show at the 41st annual Student Art Exhibition. "Artistic Reflections," a charcoal work by Courtney Pienta, took first place in the drawing category, and Holly Spear posted a second place finish in the photography category with her entry, "Not Forgotten."

"My painting was of one of my friends, and it has scenes from the Great Chicago Fire in the background," Poor, who has taken art classes with GHS instructor Robin Johnson throughout her high school career, said. "I'm always looking for different things to inspire me. In this one, I showed beauty and destruction."

Pienta has also taken art classes all four years of high school. The last art award she remembers winning was in the second grade.

"Artistic Reflections" is a still life. Pienta began with a photograph and two paintbrushes on a mirror, and drew her picture from that photograph.

"I treated it like a pencil drawing," she said. "I really paid a lot of attention to the detail. Charcoal is used a lot in simple sketches, so this was a different kind of charcoal drawing."

Poor will be a freshman at Cornell College in Mount Vernon, Iowa, in the fall. She will be an art major, and thinks she may want to eventually teach art at the college level.

Pienta plans on attending Ball State University in Muncie, where she will major in fashion design.

"I still want to experiment with art classes," she said.

Poor was also recently accepted into a juried art show at DePauw University.

Poor and Pienta both have works displayed at the Putnam County Museum.

This is the first year GHS has sent entries to the Swope show. Entries were submitted from 10 area high schools and one home schooling association.

Of 218 entries, 71 were selected to be part of the exhibit and 27 were chosen as award winners.

Patricia Belleville, associate professor of art education at Eastern Illinois University, was the juror for this year's contest at Swope.

"The artwork selected demonstrates the students' ability to handle expressiveness with the technical handling of media, principles of composition and craftsmanship," she said in a juror's statement. "Art needs to effectively and consistently handle each of these to communicate our ideas."