Dreams become a reality for Tzouanakis at Indianapolis

INDIANAPOLIS -- It started out as a little thing for little John Tzouanakis.

His father, Mike, was an elementary school principal in Greencastle and when he retired, the school was named after him. 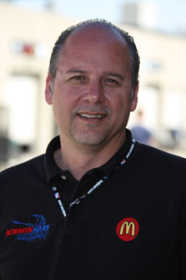 Fast forward to today. John has been with Newman/Haas, now Newman/Haas/Lanigan Racing, since its inception in 1982 and has been a team manager for the last eight. He'll be calling the shots from pit road for rookie Justin Wilson when the field rolls off Sunday for the 92nd Indianapolis 500.

His father will be working for the Rahal Letterman team's hospitality operation. And his brother is working on a truck racing team for Shelby Howard.

"I started as a mechanic and worked my way up," John recalls. "I came back in '04 when Bruno (Junqueira) ran and in '05 when we had both drivers (Junqueira and Sebastien Bourdais) in the race. In the early '70s, my brother got a job with Vel's Parnelli Jones' team. I joined Chaparral cars in 1980 and then moved to Newman/Haas."

The team has two rookie drivers in Wilson and Graham Rahal, but a seasoned team can help a young driver.

"The two series needed to come together but the timing wasn't all that good for all the people of Champ Car, Tzouanakis said. "We're still behind the 8-ball to running with the 'Big Three.'"

He was referring to the Andretti Green, Team Penske and Ganassi operations that will start eight cars from the front of the grid. Still, Rahal won at St. Petersburg earlier in the season.

"Justin and Graham have both adapted to oval racing," Tzouanakis said. "I'd like to see both cars running at the end and both in the top 10. We have a lot of engineers who have been with the team many years.

"In ROP (Rookie Orientation Program), we had to hold the drivers back a bit, ease into things and just get them comfortable. They did a very good job and were cautious -- slowly and methodically -- and kept their noses clean.

"We'll keep updating the car on changes we need to make during the race, try to stay on the lead lap, and after 400-450 miles, turn it up and see what we can do. It's supposed to be 80 degrees on race day and we haven't practiced in those temperatures, so we'll have to be chasing the car the whole race."

In all the years, with drivers such as Mario and Michael Andretti and Nigel Mansell among others, the team has never won at Indy.

"Carl (Haas) and Paul (actor Newman) have come here with some of the best drivers in open-wheel racing and come up short," Tzouanakis said. "We've won many races and won championships but this is one thing we've never done. It's something we'd like to do for our owners."

Victory Lane….a long road for a former Greencastle youth who first went with his dad to Indy.