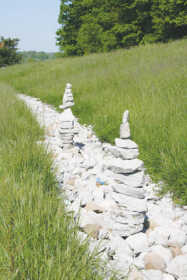 These whimsical stone art forms appeared this week at the Cloverdale entry ramp to I-70 from 231. The artists who may have just been bored truck drivers parked for a rest left behind no signature.

Ivy Tech Community College introduced Dr. Donald S. Doucette to the local community as senior vice president and provost during a reception held in his honor Thursday afternoon at the Greencastle campus.

Doucette's job will be to provide vision, leadership and direction for Ivy Tech's more than 150 academic programs at its 23 campuses statewide.

He has an extensive background in education, having served as vice chancellor for education and technology at Metropolitan Community College (MCC) in Kansas City, Mo. since 1993. There, he managed academic programs, services and technological infrastructure for the multi-campus community college.

"This is an extraordinary career opportunity to participate in a leadership team that is focused on building a model comprehensive community college system to assist the citizens and communities of the State of Indiana to thrive in the global economy of the 21st Century," said Doucette.

Doucette talked with individuals and spoke about his 30-year career. He has served as a faculty member and administrator for some of the nation's top community college systems.

"Don is a community college veteran. He has a record of leadership in innovation and has been an administrator at some of the best community colleges in the nation," said Ivy Tech Community College President Thomas J. Snyder.

Doucette recently returned from Haiti after leading the creation of the first community college in that country, the Business and Technology Institute of Les Cayes, where he serves as president of the board of directors.

He has also served as Director of Research, Evaluation, and Instructional Development at Johnson County Community College in Overland Park, Kansas and spent two years at Maricopa Community Colleges in Phoenix, Arizona.

He lives in downtown Indianapolis near the historic Massachusetts Avenue.

"I can walk to the Athenaeum and all kinds of places downtown. I really like being here in Indiana," he said.