CLAYTON -- When your top four batters go 0-for-10, not much else needs to be said. That was the reality for the South Putnam Eagles in their matchup with Cascade in the semifinal of the Cascade Sectional. The Eagles ended their season with an 8-1 loss to the Cadets.

"It was just one of those games," South Putnam head coach Harold Campbell said. "Tonight was a game where we beat ourselves. We completely took ourselves out of the game; we didn't give ourselves a chance. It's tough to battle back in a game like that." 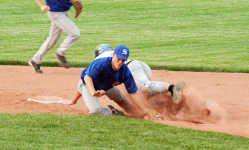 From the get go, it was apparent the Eagles were going to be fighting an uphill battle. The Eagles went three up and three down in the first three innings, while allowing Cascade to score five runs on only one hit.

Adam Hammond got things going in the third inning, reaching base after taking a shot from Cadet pitcher Ryan Blinn off his helmet. Bryce Steinbaker reached on a walk and Nathan Welty reached on an error. The Eagles scored their only run when Hammond crossed the plate in the fourth inning.

South Putnam recorded its first hit in the fifth inning when Drew Cash sent a shot to right-center field and that would be all the offense the Eagles could muster.

Pitching was an area where the Eagles failed to find a comfort zone on Thursday. Starting pitcher Grant Zimmerman got in trouble early, walking four batters in the first inning. Steinbaker took the mound in the third inning and struck out two to end the inning and two in the following inning. Noah Boswell took the mound at the end the game for the Eagles and pitched a strong inning. But it proved to be too little too late.

After the contest, Campbell acknowledged the fact that his usual hitters couldn't get on track and gave credit to Cascade's starter for shutting them down.

"Hats off to Cascade," he said. "(Ryan) Blinn was on tonight. He's just gotten better as the year's gone on. He pitched one heck of a ball game. Our big bats, the guys who normally drive in a bunch of runs, didn't do a thing for us to night. Offensively, he just shut us down. Then when you're making the mistakes defensively, you're not going to win the game."

Campbell and assistant coach Emmitt Carney assured that the Eagles would be back stronger for the 2009 campaign.