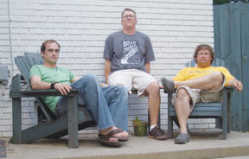 Saturday Shoes will play this week at Parkfest at Robe Ann Park starting at 7 p.m. The band is Dennis Furr, Rick Barcus and Jeremy Hayes.

The band Saturday Shoes is comprised of Rick Barcus on guitar and vocals, Dennis Furr on bass and Jeremy Hayes on drums. Alt. Country is a newer genre that has been created and popularized by Ryan Adams. Other bands in this sub-genre include Wilco, Drive-by Truckers and Son Volt.

"We cover a lot of songs from the margins of the music industry," Barcus said. "So going to one of our gigs can be a way for people not aware of some of the great artists can get a taste of non-mainstream acts."

Saturday Shoes was previously known as Skunk Hour until Furr joined. He was the one who came up with the new name, a phrase from a Ryan Adams song titled "Cold Roses."

This current lineup has been practicing together for about eight months. However, this show will be their first official gig. Barcus and Furr have also played at two local bars on various Wednesday nights with a rag-tag accumulation of musicians. That duo only whetted the public's desire for more. Now with their band, they will finally deliver.

"If you're looking for a high energy act with a lot of soul and songs that touch on things that affect the average Hoosier (love, poverty, alcoholism and agriculture) then we're the band for you," Barcus said.

When not playing in Saturday Shoes, Barcus is a graduate student at Indiana State University for English Literature and also the original owner of Sugar Moon. Furr is a DePauw graduate and is the proprietor of The Blue Door Café on Indiana St. with his fiancée Kate Durham. Hayes is a trucker working for Pingleton Sawmill.