Town pulls together for kids 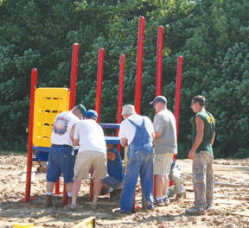 Volunteers all pitch in their help putting up the first piece of equipment to be put in place at the Cloverdale Park on Sunday.

CLOVERDALE -- Rain and storms couldn't stop a group of volunteers in Cloverdale from carrying out two years of planning and work.

"We can put the playground equipment together today and just hope that the rain doesn't wash out our holes so we can put it together tomorrow," said Lori Halloran of the Cloverdale Civic League.

Sunday brought clear skies and humidity saturated air. At 10 a.m. around 25 volunteers of the initial 95 that were scheduled, began work on erecting the playground. At least one volunteer could not do any physical labor due to a recent injury during this project.

Julie Hoffa was working at the park on Thursday in preparation for the Saturday build. She ended up falling and injuring herself. The injuries included needing stitches over her left eye and a fractured shoulder.

"They won't let me do anything today," said Hoffa. "I've already caused as much damage as I could."

This playground build is only the second phase of the park restoration spearheaded by the Cloverdale Civic League. The league was devised by Angela Ladd who was tired of having to drive to Greencastle to do everything.

"We had a park here in Cloverdale that was all grown over with weeds," said Ladd. "When I pitched the idea (for the park restoration) to 11 women in my living room, they were all fired up."

This happened back in August of 2006. The initial fundraiser occurred in October 2006 where they were able to raise $300. A year and a half later, they have raised around $70,000 and have already created soccer fields in the park.

"The playground is only phase two of our three phase plan," Ladd said. "The next thing we want to do is put in a paved walk, but that may have to wait until next spring."

The playground equipment came from Burke Inc. at a price of nearly $50,000.

The shorthanded volunteers were making frantic cell phone calls Sunday to everyone they knew in hopes of acquiring more helpers. All-in-all, they ended up with more than enough volunteers, albeit a number far less than the initial applicants.

"We should have all the playground equipment up today," Halloran said. "But more than likely we'll have to have people come in this week to put the mulch down."

The concrete footers that are necessary need to have around 72 hours to dry. If all goes as planned though, the playground should be in complete working order by next weekend.