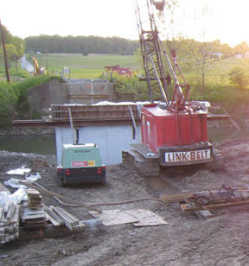 County Line Road at Mill Creek prior to flooding. Construction crews were in the process of rebuilding the bridge.

It turned out to be quite a weekend for residents of Putnam County who had to deal with high water surrounding their homes, filling their basements and trapping them inside their cars.

Perhaps the worst spot was Interstate 70 at the Putnam-Clay County line where floodwaters caused portions of the roadway to collapse early Saturday. Both the east- and westbound lanes of the highway were closed for much of the day Saturday and the westbound lanes remained closed until 4 p.m. Sunday.

The Indiana State Police said the westbound lanes were to be shut down indefinitely and that road crews were not going to begin work until Monday morning. Traffic was being diverted at the Cloverdale exit and onto U.S. 40 westbound to S.R. 59 at Brazil as of Sunday evening.

Several cars called 911 Sunday evening to report damage after hitting the spots in the road that had collapsed a second time.

Keeping up with these and more than 50 other flood-related calls over the weekend kept dispatchers at the county 911 center busy.

Emergency calls began coming into the dispatch center early Saturday after residents began emerging from their homes to find they were surrounded by floodwaters.

Other callers reported being trapped inside their cars by high water in many parts of the county.

At around 6:30 a.m. Saturday, a number of cars were reported stranded in high water at the 30-mile-marker of I-70. Later in the morning, at around 9:30 a.m., the same area saw the interstate collapse and a semi-tractor trailer fall off the side of the road.

State Road 42 saw its share of flooding with a car reported in the water near Cloverdale at around 6:30 a.m. A female driver in the vicinity of S.R. 42 and CR 765 East called 911 and said the water had filled her car to the level of the seats.

In addition to the many calls the Cloverdale Township Vol. Fire Dept. responded to on Saturday, car and driver were stranded in the water on Truesdale Road, in Owen County, at around 7:30 a.m. Saturday.

In Cloverdale itself, someone called 911 to report high water at a residence near the Dollar General Store. The caller told dispatchers that a dog was surrounded by floodwaters. 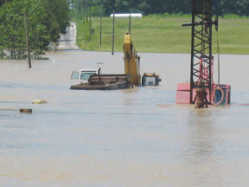 Water from Mill Creek erases County Line Road (CR?1300 South) south of Cloverdale Saturday after near-record amounts of rain fell on the area earlier in the day. Some areas in south-central Indiana reported 9 inches of rain in a six-hour span of time. Local EMA report 5 inches.

Someone living on 10th Street called 911 at around 8:30 a.m. Saturday, saying that his house was underwater.

In Roachdale, a caller reported water within 2 feet of the elementary. That call came in just before 10 a.m.

Westward in Russellville, a driver called 911 when his vehicles became stuck in high water on the road leading into town from S.R. 236.

Putnam County Sheriff Mark Frisbie told the BannerGraphic that Russellville was completely cut off for a time on Saturday.

The sheriff said he witnessed the collapse of Dunbar Hill, which is the road leading north from the covered bridge. He said he was stranded in the area of his home throughout the day due to rising waters.

There were many other flooded roads and flood-related calls over the weekend in the county including Heritage Lake, Fillmore and Greencastle, causing officials to declare an emergency. As of Sunday evening, Putnam County remained under a level four emergency.

This means "a condition may develop that limits or hinders travel or activity in isolated areas. No travel restrictions have been reported but citizens should be alert to changing conditions."

Putnam County of course was not the only county affected by the weekend floods. On Sunday, Gov. Mitch Daniels added 13 additional counties to the emergency disaster declaration that he signed on Saturday.

"Hoosiers are being incredibly caring about each other while dealing with adversity," said the governor, who surveyed flood damage Sunday in Columbus, Martinsville, Paragon and Terre Haute. "People who have lost everything were trying to cheer me up."

After viewing the severity of damage and the widespread area it covers, Daniels said he is completely convinced the state will qualify for federal disaster assistance and he will seek expedited federal relief to get help to Hoosiers.

The state will complete a separate assessment of the impact to agriculture property.