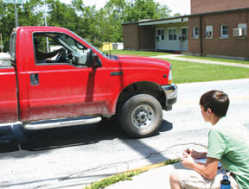 Drivers who are not wearing their seat belts, coming to full stops or are eating, drinking or talking on cell phones are being observed by Greencastle High School student drivers.

As part of their safety program, driver's education students spend about an hour at different intersections around town surveying passing cars.

Stevens had a sheet on which he recorded infractions he saw from drivers passing through the intersection.

"There are a lot of people not wearing seat belts and making rolling stops," observed Stevens.

A few moments after his comment, a truck rolled through the intersection with the driver talking on his cell phone.

He will write a summary of his survey and turn it into his instructor Dan Layton. Parents pick up kids during the class and drop them at designated intersections. An hour later they return to pick up the kids.

Students are sent out in small groups and will be working the surveys for several days.