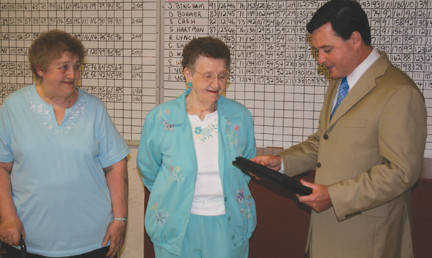 Those who work at election polls put in long hours for not much money or glory.

But two poll workers from Putnam County, Helen Knauer and Bonnie Helton, were recognized in a big way Thursday when Secretary of State Todd Rokita presented them with Honorary Secretary of State awards -- the highest honor he is able to bestow.

"These ladies are a great example for the younger generation to follow," Rokita said.

Knauer, 85, has been a poll worker in Putnam County for 17 years. She is affiliated with the Democratic Party and is the widow of former Putnam County Sheriff Kenneth Knauer.

Knauer has continued to come back to the polls year after year because she feels it is her civic duty -- and she just plain likes it.

"I enjoy being around people," she said.

Knauer would like to see voter turnout in Putnam County improve.

"It's sad," she said. "Voting is a privilege that people need to take advantage of."

She began working with absentee voters three or four years before her retirement, and continues in that capacity.

Helton, a Republican, was pleased with absentee voter turnout in this past May's primary election. The numbers jumped from 288 in 2004 to 649 this time around.

Getting citizens to work the polls isn't easy.

"It's getting harder and harder to find poll workers," said Putnam County Clerk Marty Watts. "It's hard to find people who will come in and treat the voters well. We really need them."