"I enjoy doing it or I wouldn't have been doing it this long," Mourouzis said.

For Mourouzis and his staff at the camp, perhaps the most rewarding part of the camp is being able to see the players who return and their progression as the years go by.

"We always enjoy providing a kicking camp experience for the young men who are eager to learn and improve their own skills," Mourouzis said. "Quite a few of them come back each year.

"It is really great, from the coaching standpoint, to watch the young men improve and to watch improvement from year to year," he continued. 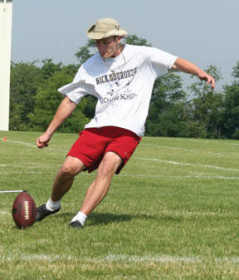 One such young man is South Putnam sophomore Jake Gould. Gould has been going to the Mourouzis camp for several years and his efforts have paid off for the Eagles. Mourouzis thinks this trend will continue.

"Jake Gould has really improved. He's been here several years," the coach said. "Last year as a freshman, he broke almost all of South Putnam's records. He's shown improvement every year and he's really going to be an outstanding kicker by the time he's a senior."

Mourouzis attributes the improvement of Gould and his fellow attendees not simply to the camp, but to their hard work and dedication.

"Each year he just gets better because he works at it. He really is dedicated and works at it," Mourouzis said.

The other Putnam County player involved in this year's camp was Greencastle senior punter Kyle Nobles, who actually won one of the camp's competitions.

"Kyle Nobles had the longest punt," Mourouzis said. "This is Kyle's senior year. Hopefully the instruction will help him have a really good year for Greencastle and Coach Meyer."

But the camp is just that -- help. Mourouzis reiterated that a young man's success in the kicking game has much to do with his dedication to his craft.

"If the young men take pride in their kicking and return to their schools and continue to work hard, they can be as good as they want to be. They can improve as much as they want to. It's a matter of just putting for the effort. If you have the proper attitude and effort and hard work, you're bound to have success in your schools," Mourouzis concluded.

As DePauw's coach from 1981 through 2003, Coach Mourouzis compiled a 138-87-4 record, making him the university's all-time winningest coach.