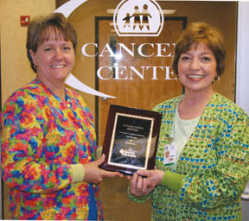 Putnam County Hospital oncology nurses Lou Fordice and Linda Mann display the 2008 Education Award from the Indiana Rural Health Association. PCH received the award for its efforts to educate the community on preventative cancer care through informative advertisements and free and reduced screenings.

The annual award honors the hospital's effort to educate the community about the importance of preventative cancer care.

"We are very honored to receive this award. One of our main goals over the last two years has been to increase the focus on public education and screening programs," Mann said. "The education program is still going strong. Getting an award for the efforts is icing on the cake."

By using hospital outreach screenings and local advertisements, PCH has focused on educating the community on cancer prevention. Newspaper advertisements have sought to enlighten Putnam County residents on types of cancer, their symptoms, risk factors and the importance of regular screenings.

According to Fordice, most hospitals do not spend as much money on these advertisements as PCH is willing to.

"I don't know why other hospitals do not dedicate more money to educational ads," Fordice said. "They are important for the community to learn about early detection."

The hospital provided cancer screenings to residents as well. Most of the screenings were conducted for free including colon cancer, skin cancer and prostate screenings, as well as blood tests and nursing home breast exams.

"When we did skin cancer screenings, we called ourselves the mole patrol," Fordice said. "If we found something in a screening, we sent the patients to their family doctors."

The Cancer Center of PCH will have a booth at the upcoming Putnam County Fair for educating people about colo-rectal cancer. Nurses will be handing out EZDetect home colo-rectal cancer screening kits and providing information on early detection on the disease deemed "the silent killer".