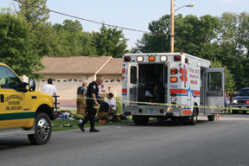 Officers check over the scene where two men were struck by a car in the Stardust Hills subdivision Wednesday evening. Meanwhile, medics are treating the men in the background.

Officers believe the two men, identified as 17-year-old Brett Elwood and 19-year-old Wade Davis, both of Cloverdale, were intentionally struck by a car on Stardust Way near the north entrance of the subdivision at around 6:30 p.m.

Cloverdale Officer Charlie Hallam told the BannerGraphic that a witness at a home near the crash scene reported hearing the car's engine revving and then saw it strike the two men before leaving the scene.

Elwood appeared to have suffered the most serious injuries and was taken, via Lifeline helicopter, to Methodist Hospital in Indianapolis. Hallam said Elwood reported pain in his right leg, back and neck and had cuts on his head.

Davis, according to Hallam, reported leg pain as well as back pain and numbness in his face. He was taken, via Operation Life ambulance, to Putnam County Hospital.

Officers tracked the car they believe was involved in the crash -- a gray 1996 Chevrolet Corsica four-door -- a quarter-mile west of the entrance to the subdivision where they found it abandoned in a driveway.

Hallam said the car showed strong evidence to suggest it is the vehicle involved in the crash, including a broken windshield and damage toward the rear of the vehicle. The car was taken to the sheriff's department impound lot where it will be searched Thursday for evidence

"Overall, the evidence indicates this is possibly the vehicle involved in this crime," Hallam said.

As for the driver, Hallam said the injured men told him who they thought the driver was, however, he could not be located following the accident. Police are concealing his identity at this time.

Bystanders at the scene told Hallam they believed the suspect may be armed with a gun and that he may have been hiding in a nearby woods. Hallam said he was not able to confirm whether the suspect had a weapon. The suspect is facing a preliminary charge of leaving the scene of an accident causing serious injury, but more charges could be filed.