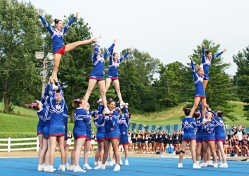 Throngs of Putnam County faithful jammed into the outdoor arena at the fairgrounds to cheer on their local cheerleaders Thursday. South Putnam put in a strong performance and walked away with second place on the night out of 12 squads.

The Putnam County Champion Eagles finished just ahead of Avon but an almost flawless routine from the Warriors of Danville ensured them a first place finish. Greencastle earned first placed honors for their freshman cheerleaders and North Putnam finished third in the junior varsity division.

An upbeat routine and a raucous North Putnam crowd left little doubt to who would be awarded the Spirit Award. When the Cougars were announced the winner, their supporters once again exploded in applause.