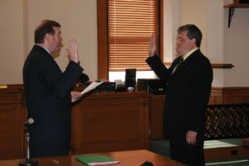 A Greencastle attorney was sworn in on Tuesday as a deputy attorney general for the state of Indiana.

Stephen K. Tesmer joined the Appeals Division of the office.

The oath was administered to him by Attorney General Steve Carter during a ceremony at the Putnam County Courthouse.

He has served as chief deputy prosecutor in Washington, Jefferson and Switzerland counties, worked for the Marion County Public Defender Agency and Prosecutor's Office and headed up a private practice in Greencastle.

Carter lauded Tesmer for his experience.

"Steve has extensive public service and private practice achievements that bring a wide range of experience to the office," he said. "We are happy to welcome someone with his background and litigation experience."

Tesmer attended law school with Putnam County Prosecutor Tim Bookwalter, who was on hand for the ceremony.

"I have great respect for Mr. Bookwalter," he said. "I'm also proud to serve Mr. Carter and the people of our state."

Carter said many people have the perception that his office is only concerned with Marion County cases, and that bringing people in from different counties is a way to get past that.

"We recognize Putnam County's contribution to our efforts," he said. "We thank your community for this talent."

Many of his family members were present to see him be sworn in.

"This is the first time since 1982 that my seven siblings, myself and my parents are all together in Greencastle," he said.