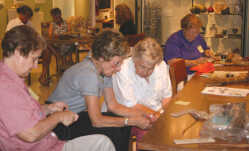 At the Putnam County Museum Thursday afternoon, 10 heads were bent concentrating on pushing a needle under a piece of thread holding long pine needles in place as baskets were being formed during a pine needle basketry program.

Instructor Sherry Gammon started the center of each of the baskets and the women who participated in the workshop were on their way to learning one of the oldest crafts known.

Dating back some 9,000 years, even before pottery made an appearance, pine needle baskets were being woven. Using sharp pieces of seashell or bone as a needle, the early Seminole Indians were one of the first tribes to make pine needle baskets. They were used to carry water or winnowing seeds and as feed baskets.

As transportation became more widely available, raffia, as well as sinew, were used to sew baskets. Raffia comes from the raffia palm, which is found, on Madagascar, an island off the coast of Africa.

However, the art of pine needle basketry can still be found including in Putnam County.

Lisa Cooper, Carole Johnston and Jan Hodges eagerly showed off what the finished product would look like. The three were sharing a table during the class and were very intent on getting their thread in the right spot.

"Hold your thread so you see the very end and the needle goes in almost every time," Gammon told the group.

Present day baskets, including those being made by the group at the Putnam County Museum, are generally made using the coiling technique.

This is one of the oldest and most universal methods of basket making, and is stitching one continuous bundle of pine needles around and on top of the row below to create the basket.

The foundation is formed with a bundle of pine needles bound together with various fibers such as raffia, split roots, birch paper, yucca, sinew, embroidery thread, yarn or waxed linen thread.

Decorative stitches and wrapping techniques are often used to make the basket strong as well as to add an attractive element.

The pine needles come from a variety of different pine trees, such as Jeffrey Pine, Long Needle Pine, Monterey Pine, Ponderosa Pine, Bill Pine and Gray Pine. Local species of pine is generally used where it is available.

Once collected, the needles are soaked in hot water to soften them. They are held together in small bundles using a short metal tube.

Needles are continuously added to lengthen the bundle as the basket increases in size. The coils are held in place on the basket by sewing with raffia or waxed thread.

The three-hour course was not enough time to complete the baskets, so the women will be returning for a second session next week.

Information about this program and others offered by the Putnam County Museum is available by calling 653-8419 or visiting the museum's Web site at www.co.putnam.in.us/Museum.