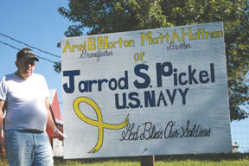 Arvel Norton proudly displays a sign with his grandson's name in the front yard of his home near Raccoon. Norton and his grandson Matt Huffman painted the sign in honor of their grandson and brother.

RACCOON -- Arvel B. Norton, Raccoon, was helping his cousin in Parke County rake hay earlier this summer when he noted someone in Rosedale had proudly painted the name of their son who is serving in the U.S. military on the side of the barn.

"I thought everybody ought to do that," said Norton. So he, along with his grandson and granddaughter-in-law, Matt and Carol Huffman, decided to paint their version of a sign about Norton's grandson, Jarrod S. Pickel who is serving in the U.S. Navy.

The Huffman's did most of the painting but the inspiration was Norton's.

Jarrod, a Greencastle High School graduate, is serving a four-year stint in the Navy. He is currently stationed in Cuba where he and his unit are guarding prisoners of war.

He is the son of David and Kathy Pickel, Whitestown.

Jarrod saw the sign earlier this year while home on leave.

"He just couldn't believe it. He was so thrilled that we thought about doing it," said Norton.

"We're really proud of him," he added.

Norton has lived all his life in the Raccoon area. He went to school in Ladoga and is retired from farming. Until his wife died 10 years ago, they farmed about 200 acres of land that stretched from his home on CR 1350 North to the Cornstalk Covered Bridge.

Now he has just 80 acres that are rented out to another farmer.

But he keeps busy. When you drive up the hill to his home you hear the baying of coon dogs. He keeps his son and grandson's hunting dogs on the farm. His son lives in Roachdale and loves to coon hunt but can't keep the baying animals at his home.

Norton also had three tiny kittens that someone had dropped off near his driveway.

"I made a place for them out in the barn and give them food and water," said Norton. "There's always animals around here," he laughed.

Norton is obviously a man with great pride in his family and a strong belief in protecting the country.

"I think it would be great if everybody would do something like this. I'd really like to see that," he said.