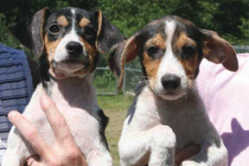 Zena and Zoey are two of the puppies still available for adoption at the Humane Society of Putnam County.

The looming closure of the Humane Society of Putnam County has already begun to have a trickle-down affect on neighboring communities.

"It's getting to be where people over there (in Putnam County) are getting vicious," said Chyrstll Owens, co-manager of the Clay County Humane Society in Brazil. "I had one guy tell me we weren't doing our job and cuss me out because we wouldn't come get an animal. I told him his county should be funding the humane shelter there, and they weren't."

The lack of county funding is a sore spot for Putnam County Humane Society officials.

"It seems like all the shelters in the other counties are funded but us," said Jane Irk, president of the HSPC board. "Other counties get money from the city and county governments ... and we were funded until two years ago."

Irk stressed that the Putnam County shelter is not technically closed yet, even though no animals are being accepted.

"We're still spaying and neutering," she said. "There are still people there, we've just cut staffing way back."

Owens said she gets about 25 calls a day from people in Putnam County wanting animals picked up.

Sharon Davidson, office manager for the Animal Welfare League of Montgomery County in Crawfordsville, said she is also getting calls from Putnam County, but that her organization will take animals for a fee.

"I don't have any idea how many of the animals are from Putnam County, because we don't track them that way," she said. "To us, these are all cats and dogs that are potential pets."

Mary Ann Lewis, an officer at the Hendricks County Animal Control Shelter, said people from Putnam County have "dumped animals here for years," and that she has seen only a slight surge in those numbers since the impending closure of the Putnam County Shelter was announced.

"We get animals from pretty much everywhere because we don't charge," she said.

A recent $30,000 donation to the shelter from a forfeiture fund administered by Putnam County Prosecutor Tim Bookwalter was earmarked for spaying and neutering and will not help the shelter stay open, Irk said.

Meanwhile, bills for propane, electric, insurance, telephone service and office supplies continue to come in to the shelter.

"If we could just get enough money to know we could stay open until the first of the year, we could be thinking beyond that."

She gets calls from people in other Indiana counties and even other states wanting to know how they can help, but said she has heard from very few local people in that regard.

"It's disheartening," she said. "It just makes me sick."

Irk suggested the solution for the shelter may be not be government funding, but community support.

"If everybody in Putnam County gave $1, we could do it," she said. "The people have the power. Instead of calling Clay County, we should be banding together to save our own shelter."