Hoosiers spending over 6 percent of earnings on gasoline

A report released last Tuesday by the National Resources Defense Council claims that Hoosier drivers spend nearly 6.5 percent of their income on gasoline and live in the seventh most vulnerable state for rising gas prices.

While Hoosiers are spending over 6 percent of their income on gas there is hope for lower costs with alternatives like ethanol, hybrid-electric and plug-in cars. The new ethanol plant near Cloverdale may offer some relief with its corn fuel.

Indiana moved up in the vulnerability rankings this year from 12th. The report does concede the rise might relate to changing the methodology to include state and federal taxes in the equation of what people spend on gas. Indiana is one of only a few states that pay state sales taxes on gasoline.

Connecticut drivers spend the lowest percentage of their income on gasoline at 3.17 percent, which was about $1,700 for an average driver last year. Indiana's average driver spent about $2,170.

The major factors in the rankings include the amount of driving residents do to met daily needs, efficiency of cars and trucks I the state and the average income of drivers.

The report also ranks states according to what they are doing to move away from oil. Indiana placed in the middle of the group with California and New York coming out as the leaders in efforts to change from oil to other products.

Some policies those states have adopted that Indiana has not include offering incentives for the purchase of new hybrid-electric and plug-in cars and trucks, investing in mass transit and adopting "smart-growth" measures intended to curb sprawl and reduce vehicle-miles traveled.

The National Resources Defense Council, an international non-profit environmental organization, conducted the study for the second year to identify states in trouble and encourage state and federal lawmakers to adopt policies that reduce reliance on oil.

Yet there is still hope for lower gas prices. Solid waste authorities in Lake County have approved a preliminary agreement with a company hoping to build an $80 million plant that would turn trash into ethanol.

Alternative fuel source alternatives offer new tax breaks, and they can also save a great deal of money at the pump while having a less harsh impact on the environment.

When completed, those plants are expected to use 150 million bushels of corn annually, roughly 20 percent of the state's corn crop, to produce more than 410 million gallons of ethanol. 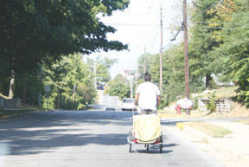 There are plenty of human powered vehicles too. This local resident has been seen riding his bike all over Greencastle.

Biodiesel is also a renewable, biodegradable and clean-burning fuel that is made by chemically reacting alcohol with soybean and other vegetable oils.

Biodiesel contains no petroleum, but is often used in blends ranging from two percent to 20 percent (B20) biodiesel.

Designed with advanced aerodynamics, more efficient engines and reduced body weight, they give drivers from 18 to 60 MPG of city and 21 to 51 of highway driving.

Popular models on the market today include the Chevrolet Silverado, Ford Escape, GMC Sierra, Honda Accord, Civic and Insight, Lexus RX and Toyota Prius. Hyberid cars both improve your mileage and reduce tailpipe emissions, so you generate less pollution and Carbon dioxide.

And, there are still other alternatives.

Electric cars run on electricity, fueled by a charging unit typically built onto the side of one's house. Electric-only vehicles can get about 50 miles of use per 12 kilowatt-hours of charge, are cleaner-running and can go from zero to 60 in about 15 seconds.

The BMW's Hydrogen Record Car (HRC), a liquid hydrogen vehicle, is an extremely fast, aerodynamic, clean-burning vehicle. Because there is an unlimited supply of Hydrogen, and because it is a renewable source of energy, this vehicle is a strong alternative to gasoline.

While less popular than our petroleum oil counterpart, these alternative fuel vehicles are making a big impact in the news and on the consumer market.

Before you make the switch, consider your personal commuting needs.