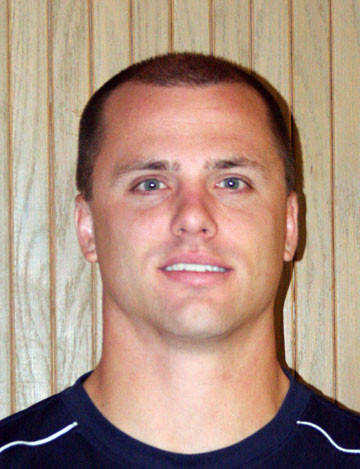 ROACHDALE -- Brady Armstrong is ready to take the reigns for the North Putnam Cougars for the 2008-09 season.

Coming off a 1-20 season and the departure of former head coach Wes Peek, the Cougars look to rebound strong and Armstrong has a vision to accomplish the task.

The road to North Putnam for Armstrong included stops at Heritage Christian and most recently Tri-West and it was his faith and a friendship that brought him to Putnam County.

"First off I need to give credit to my lord and savior. God, through circumstances, brought us out here," Armstrong said.

Armstrong attended Marian College with North Putnam athletic director Jason Sims, which was another reason for him to feel at ease with the transition.

"He (Sims) was a guy that when I talked to him and expressed my vision for the program it just lined up," he said. "It just seems like a place that we could be out here a while and build something really special."

Armstrong admitted that while his vision for the future is focused on winning, he noted it would take time. He spoke about the tragedy of last year's wreck involving two basketball players and acknowledged that Peek and team did their best considering the circumstances. Armstrong said that North Putnam is considered a football school, but believes that the same winning attitude and successes can transfer to the basketball court.

"Our vision right now is to simply instill a winning attitude," he commented. "In terms of teaching the game, I think we've got to teach part, then whole. Just see where our kids are at with just basics and then build from there."

Armstrong said that once you take care of the small stuff, the big stuff will come in time. Instead of focusing on the varsity ranks only, he is going to implement a plan to get all coaches on all levels on the same page.

"My vision is all the way to the bottom," Armstrong said. "At New Castle, everything is lined up. They're all on the same page -- the elementary coaches, middle school and all the way up to varsity coach; so we're all doing the same things. I think that's key, I've got to be able to sell that and teach that to the coaches in the younger ranks so that when they (players) get up here we're not behind. That's huge and the biggest thing I have to tackle."

Another aspect Armstrong will have to tackle is getting his team mentally ready to begin the season. That, along with fitness and defense will be a signature of the Cougars this season.

"With my guys on the varsity -- I see talent there," he acknowledged. "It's just mental toughness, conditioning and just loving defense. Just loving that fact that we're stopping them and you're not going to score. I think if we can get that mentality, I think the wins and losses will take care of themselves. I think you'll see a big change hopefully in that this year.

"On the basketball side, it's got to be boards and defense. Obviously we'll play offense, you have to put it in the hoop. For us, we have to create offense from our defense and find ways to get easy buckets," Armstrong said.

He said the role of a coach in their first year at a school is to evaluate talent and set things in motion to achieve a desired result. While he acknowledged he would be building for the future, he wants to win now. "I don't have any patience to lose," he said.

To help get coaches on board, Armstrong will create a fundamental manual and hold a clinic. He will also implement today's technology to get his message across by creating a DVD with his varsity squad performing the drills that will be distributed to the coaches.

Getting an offense and defense in place is just part of the battle. The main thing a new coach must do is get the kids believing in a system and more importantly the coach.

"As a coach, I'm just going to keep calling some meetings because it's more of a sales pitch than anything," Armstrong said. "Coach Peek was well liked, so that's always a new thing, just meeting your kids and getting to know them. That's the thing -- if you don't have those relationships, it doesn't matter how good of a coach you have, they're not going to want to go through a wall for you. I want more than anything to build that relationship.

"I don't think kids will believe in you unless they know who you are and what you stand for. I'm a big believer in being yourself -- who God made you," he added.

When fans look at the changes in the new team, Armstrong hopes they see a commitment to excellence on the defensive end and a rebounding force. Rebounding, he explained, doesn't take talent "just a nose and a want to".

Something else he believes will set his team apart is the dedication they put in during practice.

"We're going to extremely conditioned. Every drill we do will be 100 percent; no walking and I've told the kids I want you to hate practice. Because when you play games you're going to love them -- it will be a release and your time to shine. So I want our practices to be intense and very difficult conditioning-wise because I know it will pay off in the end," Armstrong said.

In addition to the conditioning of the team, he hopes to utilize their speed as well. He believes the team can use that speed in transition and get some easy buckets.

Armstrong believes that when fans get their first look at the new look Cougars, they will be encouraged. While acknowledging that he won't promise wins and losses, the effort of the team will make some good things happen. He also wants to bring something to the fans and community that they can be enthusiastic about.

"These are hard working folks and a lot of times they grind away for five days and they want to come to their school, relax and see a good product," he said. "Something they can be proud of and then go talk about during the workday and get excited about the next game.

"My goal is nothing less than to someday, in time, be a consistent winner and I want to be a state contender and honestly -- we can do it," he commented.