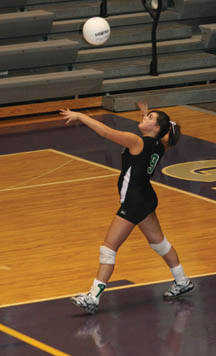 Cloverdale junior Kaleigh Sparks readies to unload on the ball during Thursday game with Greencastle. Sparks had 14 digs along with six aces.

Thursday's volleyball match at McAnally Center was a contrast of two teams at vastly different points. The Cloverdale squad fields seven seniors, while Greencastle fields just one senior, two juniors and a host of underclassmen.

However, each coach had her team do some things she wanted to see coming into the match.

For Cloverdale's Kathy Moore, it was nice to regain the Putnam County Paddle. After the Clovers won the paddle in last year's County Tourney, they quickly gave it up to South Putnam, a fact the coach hasn't forgotten.

"We really got our feelings hurt last year when we gave up that paddle to South Putnam. It's just been one of those things that has been under the skin irritating me for the last year," Moore said.

Greencastle coach Trish Lowe saw what she wants to see from her team every day -- improvement.

"We're getting better," Lowe said. "I think we did a good job of making some defensive adjustments. I think that's one reason we did a better job in the third game.

"I think we certainly have a lot of work that we need to do, but as long as every night I can go home and believe we are honestly doing some things better than we did last time, I can live with that," she added. "We're going to keep getting better and better. That's our goal, to improve every time."

It was all Clovers for the first two games. In game one, the Clovers got some big service points from Kaileigh Sparks and Alesha Evans on their way to a 25-15 victory.

In game two, it was more of the same. The Tiger Cubs grabbed an early 3-0 lead behind Mallory Miller's service, but the Clovers came right back. With four points from Sparks, Cloverdale grabbed a 5-3 lead, and did not give it back.

A bit of that may have happened to the Clovers in the third game, although the Cubs were certainly playing their best game of the night.

Greencastle built an early 6-1 lead and stretched it to 10-4 at one point. However, the Clovers remained in striking distance. They narrowed the gap to two points at five different times before tying it up at 19. After Greencastle went back up 22-19, Cloverdale once again tied it at 22 and then 23.

Finally, at 24-23, the Clovers took their first lead of the game and promptly served for the match win, taking game three 25-23.

"I think with a veteran team versus kind of a rookie team, I was pretty happy with some things that we did," Lowe said. "I felt like we improved on some parts of our game. On the third game, we had some promise for a little bit."

"The third game got away

from us a little bit. We were sitting back on our heels and not really playing our style of ball and being aggressive and being the hard hitters that we can be. When we start playing the tip game and stuff like that, it's anybody's ballgame," Moore commented.

And for each team, the quest now continues, whether it be continued improvement or another county title.

"I'm really happy with the response from the kids," Lowe said. "They continue to do what I ask and we come out and practice hard, and it's showing. We'll be a better team than we were today."

"I'm happy to have it back and hope that we hang on to it for quite a while," Moore said. "We still have two other county opponents so we're going to work hard to hang on to that paddle."