ROACHDALE -- With soppy field conditions and the loss of a team captain early, it would be interesting to see how the North Putnam football team would respond. The Cougars responded by dominating every facet of Friday's matchup up with WCC opponent Cascade, winning 35-0 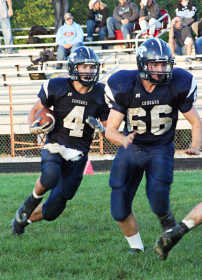 "The thing I'm excited about was our passing game in the conditions we had," Cougar head coach Greg Barrett said. "The ball was wet and we didn't let it get to us. We had some dropped balls and we knew that would happen. They packed it in pretty tight on us and we took advantage by throwing the ball. We executed well."

North Putnam (3-0, 1-0 WCC) began the game a little shaky after quarterback Scott Hunt was sacked on the first play of the game. Things looked even bleaker when senior fullback Griffen Dahlstrom went to the sidelines in obvious discomfort.

After having a touchdown called back for a penalty, the Cougars responded when Shawn Diebold blasted up the right side for a 19-yard touchdown. That would be the only score for the high-powered Cougar offense in the first quarter, but in the second quarter they would more than make up for it.

Seth Vondersaar jumped on a fumbled snap to give North Putnam great field position and Hurt didn't waste any time making things happen through the air. First was a 19-yard completion to Jerrett Ban, followed by 19-yard strike to Diebold for North's second score of the night.

On Cascade's next possession, they face a fourth-and-two and they were denied a first down when senior Josh Keyt stacked up the Cadet's Justin Helmick at the line of scrimmage.

The teams would trade possessions for the remainder of the half until Hunt found Caleb Vondersaar from 28 yards out, making the score 21-0 in favor of North Putnam with one minute remaining.

It looked like that would be the margin as the team entered the locker rooms, but with one second on the clock Ban intercepted an Alex Arthur pass and raced down the sideline for a 57-yard touchdown, taking the Cougars into the half with a 28-0 lead.

North Putnam added their final score when Darr Boruff darted through the line for a two-yard score with 46.1 remaining in the third quarter.

Normally a force on the ground, the Cougars did most of their damage on Friday through the air. Hunt completed 11-of-19 passes for 154 yards and two scores.

The North Putnam receivers seemed to have difficulty hauling in passes on the night, but less than perfect field conditions didn't help matters. The dropped passes were something clearly on the mind of Barrett. He wants his players to be able to rebound for plays and put them in the back of their minds.

"We had some dropped balls and that should not happen by some top dog receivers," Barrett said. "That's something we're going to focus on. They just have to understand to not let those things get them down and move on to the next play. That's what we'll work on. Our attitude, staying classy and focus on the task at hand. If something goes bad one play, we just go to the next and make up for it." 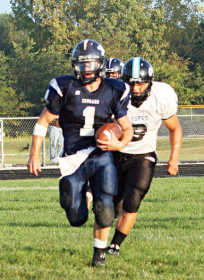 Diebold led the Cougars in rushing and receiving on the night and was a major force that helped power the offense.

"I was pleased with the way Shawn Diebold was running the ball. He had a great game. We lost Griffen in the first quarter, he got a hip pointer, but he'll be fine. When a leader goes down like that, the rest of the guys, the young guys step up and they did a nice job," Barrett commented.

In three games this season, the Cougar defense has allowed only 16 points and continues to pound offenses Friday. The front line continued to pressure Cascade and never allowed them to get comfortable throughout the night.

"Josh Keyt had an excellent game. Last week Seth Vondersaar had a nice game, so it's nice to have that one-two punch with those two guys. Our ends Jim Davis and Alex Lance are playing well. In the second half there, they didn't get to play much," Barrett said. "We plugged in some other guys we were excited about seeing; some young freshmen and sophomores were stepping up.

"That's how teams build traditions by plugging in those guys in the second half and they get some varsity experience. You can tell they've had that the past couple years and that's something we want to keep going," he concluded.

North Putnam will travel to South Putnam at 7 p.m. Friday.

Next game -- North Putnam will travel to South Putnam at 7 p.m. Friday.