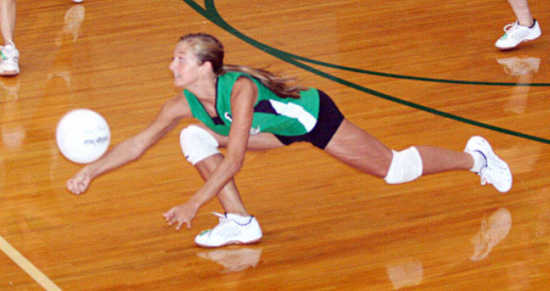 Cloverdale senior Kayla Shepherd goes low for a dig in Monday's contest with Union Dugger. The Clovers won the match in four games.

CLOVERDALE -- Serving is usually an area of strength for the Cloverdale Clovers, but Monday it was area of concern for head coach Kathy Moore.

The Clovers kept their usual starting lineup on the bench, letting their reserves get some quality varsity minutes. With their reserves taking starring roles, the Clovers didn't miss a beat.

"I played a bunch of people tonight, trying to mix some things around and get some kids some playing time," Moore said. "Actually, they did very well the first and second game, then I put in some of my usual starters and we didn't do so well. I don't know what happened, but sometimes when you're on the bench you get tight." 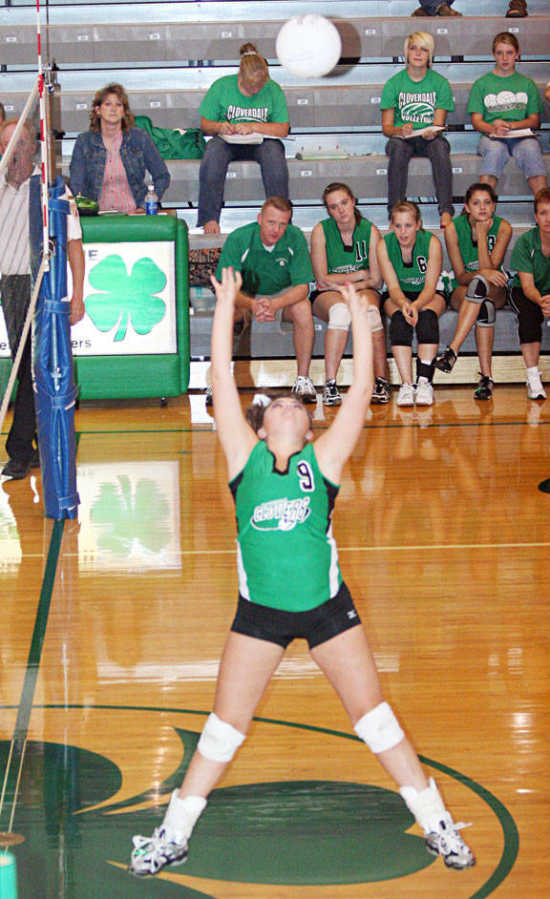 In the first game, Cloverdale and Union stayed point for point throughout the match. They began to pull away after Mariah Speedy connected on a kill. Allie Franklin's kill gave the Clovers a three-point advantage and a lift by the Bulldogs delivered the game to CHS.

Cloverdale was even more dominate in game two. After trading points early, Cloverdale scored six consecutive points to take a 13-7 advantage. The lead continued to grow as Elizabeth Cheatham recorded a kill and a big block. Kayla Shepherd served up three straight aces to give CHS a 21-10 lead. Cheatham closed the game with an ace of her own.

After their strong second game, that's when things got ugly for Cloverdale.

In the second game, the Clovers could do no wrong, but in the third, every minute proved to be a struggle. Cloverdale began closing on the net, leaving a drop spot between their line, which Union took advantage of. Errant hits and poor serving didn't help the Clovers' cause.

Cloverdale built a 4-1 lead early, but the Bulldogs started chipping away at their lead, ultimately tying the game at 10-all. Throughout the third game, Cloverdale never seemed comfortable on the court. Their aggressiveness was gone and shots they normally make just didn't happen.

Things looked better toward the end as the Clovers closed the gap to two points when Kristin McCammon unloaded on a shot making it 21-19. Union hung tough and took the third game 25-23.

It took a late rally for the Clovers to have an opportunity to win the fourth game. Cloverdale trailed most of the game, but a timeout by a visible upset Moore seemed to help the Clovers find their way.

After the timeout, the Clovers regained their usual aggressiveness and began attacking the Bulldogs. The score was tied 24-all when the Bulldogs poked the ball over the net but out of bounds giving CHS the lead. Junior Kaileigh Sparks twisted going after the ball and was in obvious discomfort as she took her serve. Her serve sailed over the net to the waiting Union players and when they began their net attack, Cloverdale's Cheatham and Whitney Bond were waiting. They rose as the Bulldogs spike attempt came, forcing the ball into the net, giving the Cloves the match win 26-24.

"We really struggled the third and fourth game," Moore said. "I don't know why -- yes, I do know why, our serves. People who usually don't miss serves were missing serves tonight. People not staying home in their positions. Also, their setting in the No. 1 spot was killing us, but we prevailed and that's a good thing."

Serving was a constant as Moore spoke after the contest. She couldn't explain what happened with her team but was positive they would rebound from their tough serving night.

"We have never served that poorly and I don't know if it was lack of focus or what it was tonight. It was just awful. I don't understand it. It's going to be a focus of discussion tomorrow," Moore commented.

Moore also spoke about the upcoming Putnam?County tournament on Saturday. The Clovers will face South Putnam in their first game and Moore thinks it should be a good matchup.

The Clovers will host Owen Valley at 6 p.m. today

Next game -- The Clovers will host Owen Valley at 6 p.m. today.