One word comes up over and over again as you talk to DePauw football coach Matt Walker about the upcoming season and Saturday's season-opener against Anderson: excited.

Walker and his staff like what they see on both sides of the ball and the third-year coach lets his excitement show. 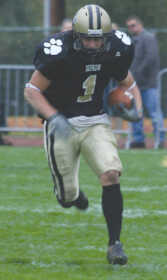 Junior Bryan Mulligan is one of a number of talented receivers back for the Tigers in 2008.

And who can blame him? He returns 36 lettermen and 13 starters from a team that went 8-2 last year, including a season-ending four-game win streak.

For the Tigers, the excitement started in late August with a solid camp. However, the work started even earlier.

"We reported to camp as good as we've ever been in terms of guys being in shape. You can tell they really got after it in the offseason," Walker said.

From that point, the Tigers have had several weeks of good practice, a scrimmage against Franklin, and now prepare to host the Ravens on Saturday.

Although the Tigers defeated the Ravens 47-7 in last year's season-opener, the team provides some challenges for the Tigers. Having spent most of camp scrimmaging against one another, the Tiger defenders have practiced against mainly an I-formation offense, while the offense has faced a basic 4-3 defense.

Anderson runs neither of these. Instead, the Ravens' base offense is a four-wide receiver spread, while the defense is a 3-5 with only three defensive backs.

"They're a team that does some things that are a little bit unorthodox," Walker said. "Because of what they do, it's probably not our best progression for the first game."

The 3-5 alignment brings its own challenges, but also some excellent opportunities for the Tigers. The formation is a good opportunity for the Ravens to bring many blitzes from many directions.

"With five linebackers, you can do so many blitzes because guys are coming from everywhere," Walker said. "When there's only three, it's a little easier recognizing what they're trying to do and who's coming. When there's now five guys out there moving all around, that becomes a little crazy."

On the other hand, only three down linemen could play into DePauw's hand. Walker always wants to establish the run first, and fewer linemen should means fewer clogged running lanes and more yards before contact.

"You can get your running back into their linebackers quicker," he said.

For the Tiger defense, pass defense would appear to be the key. However, the Tigers look to establish ground dominance on both sides of the ball.

"All through the preseason and in the scrimmage against Franklin, we've really defended the run well -- as well as I've ever seen us defend it in camp," Walker said. "Even though we play a lot of teams that are spread out and running it more than throwing it, we always want to make a team one-dimensional. We always want to stop the run first.

"If we can completely scare a team out of running because we're doings such a good job, we like our chances," he added.

With that said, pass defense is always important, especially against a spread. The Tigers have a very good pass rush returning, but a young secondary. Walker thinks the former will help bring along the latter, though.

"We feel confident now with where the secondary is and I think what's going to help them is how good we think we are up front. Both our lines are the strengths of our football team," Walker said. "With the pressure we think we can put on the quarterback with just our front four, early on it's going to protect some of the inexperience at linebacker and secondary that we do have."

Even more encouraging for the coach is that inexperience only lasts so long.

"That's an exciting thing to think about because with every snap that those guys play, they're going to get better. Then it's going to be those guys going along with a great pass rush," he said.

Perhaps the best thing Walker sees in his team is versatility. While he wants to see them run the football and stop the run, the coach has confidence in his team's ability to compete in any sort of game. On the field, quarterback Spud Dick can lead the team in whatever kind of attack it needs.

"We can get into just about any game that we need to get into," If we need to pound the ball and control the clock to win, we have the people up front to do that. If we get into a gun slinging battle and have to throw, we can do it. We only lost one receiver last year. And with having Spud returning and his production, we're excited about throwing the ball around."

This confidence springs from having all the right pieces to the puzzle.

"We can get in and out of every kind of look that we need to," Walker said. "A lot of teams are going to the spread because it's hard to find good tight ends and fullbacks. One of the things we're excited about is we have good fullbacks; we have good tight ends. But we can also jump to four wide receivers and we're just as dangerous."

On Saturday both teams will be trying to fill some big shoes at the running back position. The Tigers lost their all-time leading rusher in Jeremiah Marks, while the Ravens lost fellow All-American Denny Kimmel.

For the Ravens, the answer may have come in Darryl Stott, who led the Ravens with 108 all-purpose yards in their opening 27-17 loss to Taylor last week.

As for the Tigers, the question remains, although Walker has nothing but confidence. He said he's been asked ever since last season what the Tigers will do to replace Marks. He smiled and said everyone will find out on Saturday.

For any team entering its first game of the season, though, questions remain. The Tigers may have defeated the Ravens 47-7 last season, and Anderson may enter the game 0-1, but they also enter the game hungry for a win against a school that has had the success of DePauw.

"I know that they're dying to play us because we've been pretty good. We've got kind of a mark on our backs for recruiting around this area," Walker said. "From a personnel and talent standpoint, I think we match up very well. If we come out and play like we should and don't do anything crazy, I'm looking forward to a pretty big day, I hope."

The Tigers and Ravens kick off Saturday at 1 p.m. in Blackstock Stadium. The game will be broadcast live on 91.5 WGRE.