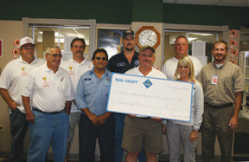 Golfing with one eye can make hitting the ball difficult sometimes. Terry Clodfelter knows this for a fact. But, so do a number of golfers who participate in Clody's One-Eye Golf Tournament every year. This year's event will take place Saturday Sept. 13 at Old Hickory Golf Course.

The tournament actually began in 1992 when a group of friends threw money in a hat, played with eye patches and the winner took all. It came about as a result of ribbing Clodfelter for missing the ball when he took up golf.

Clodfelter lost the sight in one of his eyes when he was 13 years old. While helping cut down a thorn tree in the spring, one of the thorns went into his eye. That resulted in a cataract and by the fall his vision was blurry. He went to Riley for treatment and underwent the then-new laser technique. His eyesight continued to deteriorate, however, leaving him without vision in the injured eye.

"When I took up golf everyone made fun of me because I kept missing the ball," said Clodfelter. "I told them, you try hitting the ball with one eye."

After the first tournament in 1992 the group continued to play for four years following that same format.

But in 1996 with seven or eight teams signed up, the group decided to make a difference for children with vision problems. They raised $440 that year.

By 1999 the tournament had raised more than $12,000 for children's eye care at Riley Hospital for Children.

In fact, the donations have led to the Clody's One-Eyed Golf Scramble Digital Diagnosis and Consultation Laboratory at Riley.

Over 13 years the golf tournament has raised over $100,000 and sent six Putnam County kids to Riley for eye treatment. A seventh will go in late September. All the students attended Cloverdale Community Schools. This year, the group sent e-mails and flyers to all the schools in the county letting them all know that during this year's tournament, Operation Kidsight is being offered to children free of charge at the Moose Family Center in Greencastle.

From 10 a.m. -- 2 p.m. free vision screenings will be offered to children from ages one to 18, using the most high tech equipment available for children.

"Something as simple as an eye screening can make a big difference in the life of a child. Kidsight is a great opportunity to detect potential eye problems," said Clodfelter.

A lot of fundraising surrounds the golf tourney with donations of prizes by hundreds of local merchants. Sponsors for the event are York Pontiac, Cash Concrete and Wal-Mart Transportation.

There are 45 teams currently signed up. The afternoon slots are full but there is still space for players in the morning. Golfers will tee off at 7:30 a.m. and 1 p.m. Saturday, shoot a round of golf with patches over one eye and end up at the Moose Lodge for dinner and awards that evening.

The group of organizers led by Terry Clodfelter told Wal-Mart Transportation members that he expected sunshine and no rain for the event.

The group is already planning for next year's event in which Clodfelter is planning "something big from outside the county." The group is also hoping to be able to add a second golf event to their yearly schedule.

Anyone interested in playing can call Terry Clodfelter at 653-9322 or Tony Sparks at 653-7867. For information about the event go to www.clodysoneeyegolf.com