Is your child rider properly restrained? 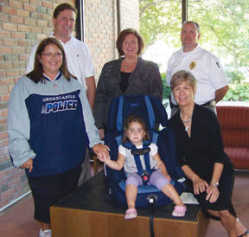 All 50 states including Puerto Rico and the United States Territories have enacted laws requiring the use of child passenger safety systems.

According to the proclamation, in 2006, an average of five children ages 14 and younger were killed and 640 children were injured in motor vehicle crashes every single day.

National Highway Traffic Safety Administration said while 98 percent of America's infants and 96 percent of children ages one to three are now regularly restrained, not enough children of all ages are restrained properly for their size and age.

Only 37 percent of children ages 4 -- 7 who should be using booster seats to protect them are actually in them. This puts the children at an unnecessary risk of being injured or killed in crashes because they are simply in the wrong restraint for their size.

A study done by the Children's Hospital of Philadelphia found that in children ages 4 -- 7 who use booster seats, 59 percent of them are less likely to be injured in car crashes than children who are restrained only by seat belts.

The thing for parents to remember is "The Four Steps" for kids. Starting at birth, the child should be in a rear-facing child safety seat.

They can then graduated to a forward-facing seat at a minimum of 1-year-old and 20 pounds. When the child is 4 and at least 40 pounds, they can use a safety seat. Finally, an adult seatbelt when 8 years or at least 4-feet 9-inches tall.

The safest place for all children up to age 13 is in the backseat.

National Seat Check and Child Passenger Safety Week provide communities and organizations an opportunity to join together through public information, education and enforcement efforts to work toward increasing the correct use of safety seats and booster seats by focusing public attention on the lifesaving benefits that will help to significantly reduce death and serious injury to children.