Clovers get first win of season, down Turkey Run 42-14 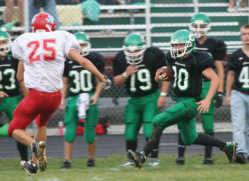 Three excellent plays by the Clovers blew the game wide open, as they outscored Turkey Run 28-0 in the second half on their way to a 42-14 win, their first of the season.

"We made a few adjustments for their offense at halftime and started shutting down their option," CHS coach Kyle Winkler said. "The thing that gets me the most is, we practiced against option all week, and we had guys doing exactly the opposite of what we had been telling them."

But with the defense beginning to click, the Clovers got a big gift from Warrior running back Jacob Hayn when he coughed up the football at the Clover 37.

The offense followed suit and marched the ball down the field. The Clovers went 63 yards in six plays, with Jordan Hayden finding Lee Secrest for a 13-yard touchdown pass. After a failed PAT, it was 20-14 with 6:22 to play in the period.

Three plays into the next Warrior drive, Clover junior Rodney Weather picked off the Warriors' Jason Millikan, returning the ball 45 yards for another Clover score, to make it 26-14 with 4:35 remaining.

Three plays later, it happened all over again. This time, Dillin Gray returned the ball 15 yards to the Warrior 25.

On the first play of the ensuing drive, Hayden found Keefer on a 25-yard touchdown strike. The two-point conversion by Gray made it 34-14, as the Clovers had scored 20 points in a little over three minutes.

The game was in hand, but it hadn't been so easy in the first half, when two Clover fumbles on special teams led to the Warriors' (0-4, 0-2 WRC) 14 second-quarter points.

"In the first half, we were doing what we wanted to do offensively, but we had two big miscues on special teams. Turkey Run capitalized on it."

CHS got on the board first, taking their opening possession 67 yards in 16 plays and nearly eight minutes. Gray rumbled in from eight yards out and Keefer added a kick to make the game 7-0.

But after a defensive stand, Weather fumbled the ensuing punt. The Warriors took over at the Clover 15 to begin the second quarter.

In just two plays they found the end zone, as Millikan ran for an 11-yard score, making it 7-6 Cloverdale.

The kickoff that followed was more of the same, as Cloverdale's Chris Nees mishandled the kick, and the Warriors recovered at the 37. 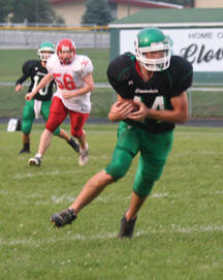 This time it took eight plays, but the result was the same. Hayn's touchdown and a successful two-point conversion made it 14-6 Warriors with 7:11 to play in the half.

Although the Clovers were able to recover with a one-yard plunge by Sam Spinks, they were not playing as they knew they should at the half.

"The focus of Cloverdale football is to do your job. When all 11 of them go do their job, we look pretty good," Winkler said.

In the second half, the Clovers were doing their jobs in all facets of the game, and it showed.

The final score came on a 96-yard drive in which Gray saw two long touchdowns called back by penalties. He finally got his second TD run of the night on 12-yard run.

A botched extra point attempt turned into a two-point conversion run for holder Zak Osburn. It brought the score to its final total of 42-14.

Coming into the week 0-3, the Clovers needed this one. They also need some time to relax, so Winkler gave his squad Saturday morning off from their normal practice.

"It's a big morale booster. Everybody knows we have a win now. We're going against a team that might not have a win next week, so there's more confidence for our team," Winkler said.

"I think everybody needed a morning off, including the coaching staff. So, I'm going to do what I usually do, just starting a half hour later tomorrow morning," he added.

Now the focus turns to Cascade and trying to pick up a WCC win. The Cadets fell to 0-4 with a 57-0 loss to Heritage Christian on Friday.

But as always, the true focus of the team will be on themselves.

Cloverdale travels to Cascade at 7 p.m. next Friday.

Next game -- Cloverdale visits Cascade at 7 p.m. next Friday.