The first matchup between county rivals this season turned out to be one heck of a game. In the mud and muck, North Putnam traveled south to face South Putnam and came away with a hard-fought 20-6 victory. 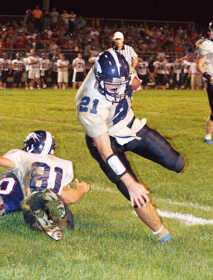 North Putnam's Griffen Dahlstrom turns the corner and scores from seven-yards out in the fourth quarter of Friday night's contest with South Putnam.

Both squads took to the soppy field and proceeded to play 48 minutes of pure smash mouth football, much to the delight of the fans.

"That's why you play them," South Putnam coach Troy Burgess said of the contest. "It was a big crowd, big night -- a special night. If you are from Putnam County, you have to be proud of what these two teams did tonight. They played hard between the whistle, there were no shenanigans or crazy stuff going on. There's going to be some late hits -- that's football, but you know what, there was nothing stupid happening. Both teams played hard and represented their schools and their community very well," he added.

Things didn't start well for the host Eagles, as North Putnam took their opening possession for a score. After a seven-yard scramble by Cougar quarterback Scott Hunt, he went to the air and found Shawn Diebold twice for 64 yards. It was Diebold that put North on the board after a one yard rushing touchdown at the 9:45 mark.

The Eagles would hold the Cougars scoreless for the remainder of the half.

South Putnam had a chance to put some points on the board as kicker Jake Gould attempted a field goal in the second quarter. Gould's kick came up short and an aware Jerrett Ban caught the ball at the 10 yardline and raced down the Cougars' sideline for a 69 yard return down to the Eagles' 21. The Cougars were unable to capitalize on the field position as Griffen Dahlstrom fumbled the ball inside the 10 to give possession back to the Eagles.

Sloppy conditions spawned some sloppy play. The two teams combined for three first half fumbles and six for the game. The teams traded stalled drives for the rest of the half and entered the locker room with the Cougars up 7-0.

"We started the first series like I wanted to," Cougar head coach Greg Barrett said. "I felt like we got a little out of our game plan; I don't feel like I make some calls that I would have liked to have made. Two fumbles is going to kill you. Had a couple routes not run hard; we had guys open."

North Putnam's leading rusher Dahlstrom was held to just 30 yards in the first half, but would make up for it in the second.

After a South Putnam three-and-out to start the second half, the Cougars pushed the ball down the field behind a more productive Dahlstrom. He rushed five times for 52 yards, setting up a nine-yard touchdown pass from Hunt to Kyle Adams with 5:49 remaining in the third.

South gave it right back after a fumble on the kick return, but the Eagles' defense stepped up big time. The Eagles' Hank Goldman came up with two huge plays for South Putnam. First he sacked Hunt for a nine-yard loss, then proceeded to intercept Hunt on the next play.

The good fortune was short-lived for South as quarterback Hunter Edwards fumbled on the ensuing possession.

Once the Cougars got the ball back their destination was clear -- the end zone. Dahlstrom again tore through the defense and with just six seconds into the fourth quarter scored on a seven-yard rush, clearing five of those yards in the air. 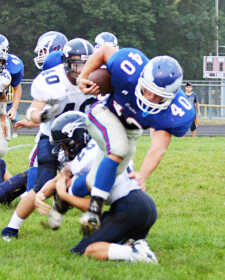 South Putnam rusher Drew Cash runs over North Putnam's Travis Kratt during the first quarter of Friday's contest. Cash rushed for 110 yards on 26 carries as the Eagles lost to the Cougars 20-6.

Not to be outdone, the Eagles amped up their running game as well. Drew Cash rushed eight times for 47 yards, scoring from four yards out to give South Putnam their only score of the night. The Eagles went for the onside kick and Gould executed it to perfection. The ball came off the tee, ran for seven yards and then bounced toward the heavens, where Conor Frame snatched it from its ascent. But three plays later the Eagles fumbled for the last time and the Cougars ran out the clock.

After a slow first half, Barrett was happy with the elevated play his squad came out with in the second half. He also was happy for the return of his workhorse fullback.

"I was very excited how we came out the second half. They made a statement and moved right down the field," he said. "It's nice to get Griffen back. He was out all last week, you can tell because he was cramping up a little. He lost a little shape there, but we get that horse rolling and we'll be good. Darr Boruff came in a made some big blocks for us."

On Friday, the Eagles were able to get down field, but tiny mistakes stalled their drives and lead to bigger problems for the team.

"It's been the story of our three losses," Burgess said. "We move the football, but we get to crucial times and we seem to make mental mistakes." He commented on how it was little things like missed assignments, players stepping the wrong way and dropped balls that wee giving the Eagles fits and Friday was no different.

"They (North Putnam) made the plays when they had to and we didn't," he said. "On the other side of that, I thought defensively we made some big plays. We stopped them a few times when we needed big stops. You can't keep making those kinds of mistakes and you can't keep giving good football teams a short field and give them a lead in the first quarter."

The Eagles did attack the Cougars all evening and that was precisely what Barrett was expecting.

"I knew they were going to come right at us," Barrett commented. "Coach Burgess does a great job with these guys. This is my first year playing these guys and I think that's one heck of a game for the crowd tonight. They are a physical group of kids and I'm sure we'll end up seeing them again. They're just going to get better."

Getting better is what Burgess spoke about after the contest and noted the difference between some of his teams in the past and his current squad is their ability to raise their level of play, and in turn, their success.

"I've had teams where I've felt like "we're getting our tails whipped and there's not much we can do," -- I don't think that's the case," he said. "We can fix the problems we're making right now. Physically I think we can line up and play football with a lot of people; we've just got to fix those little mistakes."