The proclamation commemorates the 70-year anniversary of the opening of the pioneer cabin in Robe-Ann Park. This makes Sept. 18, 2008 "Pioneer Cabin Day."

On Sept. 18, 1938, the Washburn Chapter of the DAR dedicated the 1840's pioneer cabin in Robe-Ann Park. It was intended to serve as a living museum to illustrate pioneer life in frontier Indiana. 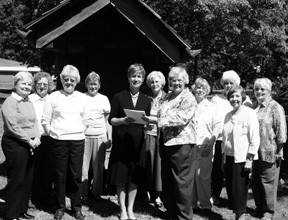 The cabin is open to the public every Sunday from Memorial Day to Labor Day and by appointment for school children and special groups.

The cabin is the only living museum in Putnam County. Everything in the fully furnished cabin is authentic to life for Putnam County during the 1840's.

According to DAR member Jinsie Bingham, "The furniture and artifacts have been donated by family and friends over the years to show a true picture of pioneer life in frontier Indiana."

The Washburn Chapter of the DAR was founded in Greencastle on Dec. 14, 1902. It was the 13th DAR chapter in Indiana and had 13 founding members. Members considered this a lucky number corresponding to the original 13 states.

The chapter was named for General Henry Dana Washburn, a Civil War veteran who was later names Surveyor General of the United States. It was he who first explored the Yellowstone Territory and three of his family members were charter members of the local DAR chapter.

Today the local chapter has about 50 members whose most visible presence in the community is the cabin in Robe-Ann Park.

The local chapter is having a pitch-in birthday party complete with punch and cake on Tuesday Sept. 16 at 6 p.m. All current and former members are welcome to the celebration that will take place in Robe-Ann Park. For more information, contact Jinsie Bingham at 653-3565 or June Brattain at 653-6834.