Local golfers do battle at conference 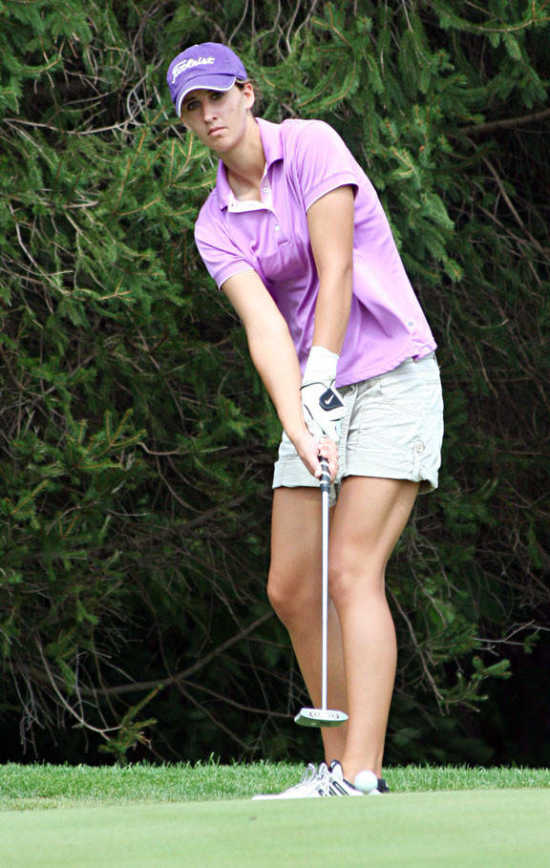 Greencastle sophomore Chelsea Samuels stares down a putt during the conference meet Saturday. Samuels was the county's low scorer with a 92.

The top finisher for the county was the youthful Greencastle Tiger Cubs who finished the day in third with a 439. Despite some gusty winds, the Tiger Cubs had two golfers earn All-Conference honors and showed that they will be a force to deal with as the season comes to a close.

"Hopefully we have something good we can build on with four sophomore's and one freshman, we should get better next year and that will definitely be a goal we're shooting for coming back here and finish even better," GHS head coach Brad Kingma said after the meet.

In addition to Samuels, Katie Hedge came out and fired a 101 to put herself on the All-Conference team.

"This was the second year that we had a freshman finish all conference, so we're real happy about that. You could just see how happy she was -- beaming," Kingma said.

Samuels started the day strong and continued to press the course throughout the day. The only area of concern was around the greens. Kingma noted his sophomore was trying out a new club and they are still searching for the desired effect.

"We're very pleased with a third-place finish and for Chelsea to get second. She had a real good front nine and was just on fire. She struggled on the back nine with her short game. She actually shot a stroke worse than last year," he commented. "She's trying a new club. She's been using a lob wedge for the first time and she misused it a few times. She's hitting it well, but she's not very precise yet. She had some other problems with some chips, so that's something we'll be working on."

Greencastle had a trio of girls finish within two strokes of each other on the day. Diane Wokoun and Kristen Hutcheson both shot 123, while Kay Wood came in with a 125.

The Eagles were without their No. 2 golfer Grace Aker for their conference match, but South still was able to put together some solid scores to place fourth overall.

Heather Hughes led the Eagle effort with a 95; she was followed by Kelsey Searles' 121. Cassie Warren fired a 123 on the day and Sarah Dobson came in with a 128.

South Putnam's Sarah Burnham stepped in for Aker and shot well on the day. She shaved six strokes off her front nine score and posted a 122 for the Eagles.

Improvement and surviving the day was the name of the game for Cloverdale on Saturday. The Clovers had two players earn All-Conference honors and two finish the day strong. The Clovers finished fifth with a 476.

"It was about as good as we could have hoped for -- it's basically what we were shooting at," Clover head coach Ken Williams said. "We were hoping to improve a little bit, beat someone and we beat Speedway today, so that's a big plus for us."

The issue of the day for the Clovers was the condition of No. 1 golfer Kayla Langdon. Langdon shot a 103 and was in visible discomfort walking the course; something Williams alluded to after the meet.

"She's hurting; she's got a bad foot. She struggled, especially on the back nine, with her game. She thought she should have been a lot higher and she should be," Williams said. "She had an off game."

Along with Langdon, Elizabeth Wiley continued her strong season by shooting a 106, earning her All-Conference as well.

Williams praised Wiley's play after the contest and commented on how proud of all four of his golfers.

The medalist of the meet was Monrovia's Julia Porter. Booming drives and deft iron shots led to her finishing 16 strokes ahead of second place Samuels. Porter shot a 5-over par 76, including a 1-under 35 on the front nine.

Cascade and Monrovia used his home course advantage to place first and second at the conference meet. The Cadets were first with a 414 while Monrovia was second with a 425.