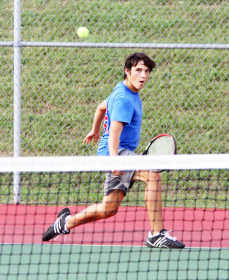 Greencastle's David Cath sends a backhand over the net during Tuesday's contest with Southmont. Cath was Greencastle's lone winner of the match.

The Greencastle boys' tennis squad hosted Southmont Tuesday. The Mounties were too much for GHS as the Tiger Cubs fell 4-1 on the evening.

"We had one win, we had some close matches; it was just a little more progress and that's all we're looking for," GHS head coach Bart Spencer said. "That and enjoying ourselves."

Greencastle's lone win came at No. 1 singles as David Cath quickly defeated Brody Nichols in straight sets 6-0 and 6-2. Nichols was a more powerful hitter, but Cath wore him down resulting in several shot that were long or in the net. Equally impressive was Cath's ability to quickly turn on shots and send them rocketing across the net.

"David has really learned the game so much this year and is learning to take what the game gives him and look for his opportunities," Spencer said.

Logan Grzesiek fell in the No. 3 singles match to Jacob Roberts 6-2 and 6-4. Grzesiek was able to trade shots with Roberts throughout the match, but tiny mistakes took their toll as the match wore on.

The No. 2 singles matchup involving Greencastle's Ty Fauvergue and the Mounties' Jacob Roberts was a true grinder. These two athletes went at each other with neither willing to yield to the other, which resulted in some great tennis action.

Fauvergue played a smart match and was able to place shots on a dime, but as the match wore on, Roberts was able to answer Fauvergue's barrage. Fauvergue ultimately fell to Roberts 6-2 and 6-4 and left the court unhappy with his effort, but Spencer liked what he saw.

"Tonight Ty didn't feel good about his game, but every time I saw him, he was hitting some beautiful shots down there. The other guy just hit a few more beautiful shots back," Spencer commented.

The struggles continued for Greencastle in the doubles matches.

The No. 1 doubles team of Vic Ness and Joey Kass fell to Southmont's Kyle McMurry and A.J. Bradshaw 6-3 and 6-1. Cy Spencer and Dustin York also had a hard time at No. 2 doubles as they fell to Jonathan Christensen and Colt Hill 6-3 and 6-1

The 2008 season has been a learning process for the entire Tiger Cub squad and Spencer believes that the team is making great strides. With various levels of experience on the team, Spencer acknowledged the players have learned the basics and now it's just a matter of implementing their skills.

"They've learned the game so they know what to do and where to hit it. Now it's just a matter of executing it. To hit it where you should be hitting it. I'm just tickled to death with their progress," he said.

With over a week until their next match, Spencer plans on his teams spending a lot of time on the courts and getting healthy with sectional just around the corner.

Two of their upcoming matches will be against sectional opponents and Spencer will be using those encounters as a measuring stick for the Tiger Cubs.

"We have three matches next week before sectional," he said. "Owen Valley and Linton-Stockton are in sectional, so we'll really figure out where we're at next week.

"That's still our goal -- to get in there and be good enough compete in sectional," Spencer commented.

Greencastle will host Linton-Stockton at 4:30 p.m. next Wednesday.

Next match -- Greencastle will host Linton-Stockton at 4:30 p.m. next Wednesday.