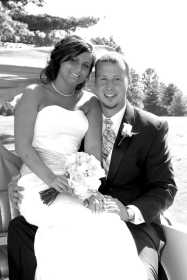 Robert Casey Harris of Greencastle and Amanda Jean Newlin of Monrovia were married by Elder Mark Scott on Aug. 30, 2008, at Valle Vista Golf Course and Conference Center in Greenwood.

The bride is the daughter of Bruce and Debbie Newlin of Monrovia. She is a 1998 graduate of Monrovia Junior-Senior High School, and is a licensed insurance agent for State Farm Insurance.

The groom is the son of Randy Harris of Crawfordsville and Theresa Portwood of Brownsburg. He is a 1999 graduate South Putnam High School and is journeyman carpenter for Indy Walls and Ceiling.

Jon Hassler and Greg Dean were the best men, and the groomsmen were Dustin Scott, Casey Carter, Bruce Newlin Jr. and David Polson.

The couple's son, Parker Harris, acted as the ring bearer along with Jordan Newlin and Joel Harvey as ushers.

The couple resides in Monrovia.