CASCADE -- Cloverdale was without its starting quarterback Friday, leaving its passing game all but nonexistent.

For a time, the game was one of the sloppiest you'll see played.

But the Clovers came away with a 32-20 win over Cascade and a two-game winning streak. At the end of the night, that's what really counts.

In a game that saw nine combined turnovers, the Clovers (2-3, 1-2 WCC) were the recipients of seven of them, turning that advantage into 26 points.

"I just loved the kids' enthusiasm. They played with great heart," CHS coach Kyle Winkler said. "Them dropping the ball so many times in their half of the field played to our favor, but that just picked up our intensity so much when you're starting on the 30 or the 35-yard line." 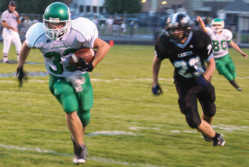 Cloverdale junior Zak Osburn (33) runs away from Cascade's Ozy Riley, as he returns a second-quarter interception 25 yards for a touchdown.

After going 51 yards on seven plays, new quarterback Jordan Brinkman scored on a one-yard sneak to put the Clovers up 6-0 with 5:55 to play in the first.

From there, the Cadets (0-5, 0-3 WCC) presented the Clovers with a pair of gifts that they took full advantage of.

The Cadets fumbled the ensuing kickoff, and Cloverdale took over at the Cascade 26. The offense mustered just 12 yards in six plays, but Nick Keefer came on to make a 31-yard field goal and give the Clovers a 9-0 advantage.

On the next kickoff, Cascade fumbled yet again.

This time the Clovers took over at the 25. In five plays, Dillin Gray scored on a one-yard plunge. The Keefer extra point made it 16-0 with 11 seconds to play in the first.

On the Cadets second possession of the second quarter, the turnover bug struck again. This time it was Cloverdale's Zak Osburn intercepting an Alex Arthur pass and returning it 25 yards for the score. A successful conversion run from Gray made it 24-0, Clovers.

On its next possession, the Cadet offense finally found itself, going 63 yards on eight plays, with Arthur running for the last nine and a score. It was Cascade's first score of the season, and made the game score 20-6.

While the Clovers gave up 20 points and 212 rushing yards to the Cadets, Winkler was pleased with how his defense responded to the Cascade offense.

"Everybody did their job tonight. They came out in a new formation, but they were still running the triple option, and I felt like our kids adjusted to it well in the first half," Winkler said. "I tried to throw the kitchen sink at them in the second half and I think I got a couple heads spinning. We'll figure out to keep it simple on defense next week."

As for the Clover offense, it thrived on the turnovers. While only the opening score came following a kickoff or punt, the offense did its job all night. With regular QB Jordan Hayden out, Winkler expected a lot out of his running backs and just asked Brinkman to manage the game.

"Luckily, we all go through the motions throughout the week of getting the second- and third-string quarterbacks a lot of reps. We were pretty confident that the number two guy was going to do a good job tonight," Winkler said.

The starting backfield of Dillin Gray and Sam Spinks also did their jobs. Gray ran 27 times for 78 yards. Spinks rushed for 105 yards on 11 carries. While the offenses yards per carry may not have been extremely high, the runners did their job of chewing up clock.

With the Cascade defense expecting run and playing for it, the Clovers did what they needed to do to get Friday's victory.

"We went with the philosophy that we were going to feed our studs," Winkler said. "We fed our fullbacks and our tailbacks and we threw maybe too much for my taste, but we got the victory out of it. They were stacking the box on us, so you have to throw it every once in a while."

The third quarter saw the Cadets remain loose with the ball, while the Clovers joined them for a bit. The two squads combined for four turnovers in the quarter, with only Cascade being able to take advantage for a score.

Arthur rushed for his second touchdown with 7:46 to go in the period, making the score 24-14 after the two-point conversion.

But Cloverdale put the game all but out of reach early in the third. After yet another Cadet fumble, the Clovers took over first-and-10 from the Cadet 12-yard line. Gray found the end zone on a four-yard rush with 11:33 remaining in the game. Brinkman ran in the two-point conversion after a botched extra point, making the score 32-14.

With a two-game winning streak, Winkler looks for even better things from the Clovers in the coming week of practice.

"The intensity for practice will go up tenfold," Winkler said. "Our kids are going to realize how important special teams are because of what happened to the other team tonight. Sometimes our kids are going 90-percent because they don't want to get blindsided. Some kids don't go full speed in special teams. They're going to know, you have to go all-out on special teams, or something like that's going to happen to us against South Putnam. They have a great kicker, and I think he can put it anywhere on the field that he wants."

Looking ahead to the Eagles, Winkler said his team's preparation began this morning. It's a big rivalry game, so his players should need no further motivation.

Next game -- Cloverdale visits South Putnam at 7 p.m. next Friday.