That word would best describe the Greencastle sideline in Friday's clash and ultimate victory with South Putnam. The Tiger Cubs rode a wave of momentum that began at the end of the third quarter and seized a victory over the Eagles 10-7. 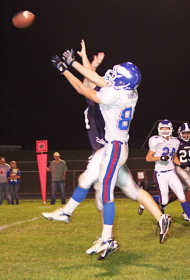 The Eagles' Nathan Welty (front) jumps for a pass, that is tipped by Greencastle's Kenny Buchanan and eventually intercepted by Tyler Pettit.

"We stumble-bummed around last week, but the kids bounced back and handled things well and we did a good job," he added.

The scoring was almost a secondary element to Friday's battle. Sure the points mattered, but what mattered more was the shear determination of both squads to find their footing in the 2008 campaign.

For Greencastle, it was overcoming obstacles such as losing their starting quarterback and for South it was putting together 48 solid minutes to get a win. The youthful Tiger Cubs was able to come together at the right time.

The Eagles opened the game with a 60-yard strike down the field that caught the Tiger Cubs as well as most of those in attendance by surprise. Primarily a group assault force, South went airborne down to the eight-yard line. Two plays later, their quest for a score was halted when Jesse Ford came flying through the line, laying a smashing hit into quarterback Hunter Edwards, who fumbled.

Greencastle gave the ball back after a three-and-out and the Eagles didn't hesitate to do some damage. Drew Cash capped a seven-play, 38-yard drive by driving the ball up the middle for a five-yard scamper for a touchdown with 54 seconds remaining in the first quarter.

On the ensuing kickoff, South Putnam's Jake Gould drove a ball deep into Greencastle territory to a waiting Ashton Marshall.

He wasn't stationary for long.

Marshall tore up the field, slicing through defenders and when he came to a stop he had traveled 96-yards for Greencastle's first score of the game, knotting the score at seven-all.

Greencastle's defense made some key stops in the first half and Meyer thought the team did the things it had to do.

The second half started with a long South Putnam possession, but again the Tiger Cubs responded and halted their march and on their next possession, started a march of their own.

After a loss on their first play of the second half, Greencastle put their hopes on the shoulder, and legs, of quarterback Jordan Hickam -- literally. Hickam rushed seven times for 76 yards before the drive stalled at the 30-yard line. Then Greencastle's Buzz Deer came in to do what he does best.

With 34 seconds remaining in the third, Deer drove what ended up being the game-winning 47-yard field goal through he uprights, giving the Tiger Cubs a 10-7 lead.

South Putnam refused to go down without a fight and put together some long drives in the fourth quarter, but Greencastle's defense came up big at all the right moments.

GHS sophomore Tyler Pettit hauled in two interceptions in the final quarter, while Pat Richardson and Kyle Buchanan kept Edwards under constant pressure. After keeping the ball on the ground, the Tiger Cubs were able to celebrate as the clock wound down to all zeros.

"The kids never gave up and they hung in there," Meyer said. "The one think we told them they were going to do was run right over top of us and I think we did a nice job stopping the run on them and forced them to do some things they didn't want them.

"I don't think they wanted to throw the ball like that and we did enough -- we did what we had to do," he concluded.

When approached after the game, South Putnam head coach Troy Burgess was more than disappointed. He knows his team has the tools to get the job done, but they can't seem to find their footing. Burgess acknowledged that the team wasn't ready to strap the pads on for Friday's contest and he took full responsibility for that.

"It's real simple, I can do it in one sentence -- Greencastle out-coached me tonight," he said. "I didn't have my team ready to play football, obviously. We acted like we had no idea what we were doing on running plays or passing plays. Defensively, across the board, we were lost tonight and that starts with me. There's no other place to put the blame; it starts with me. I didn't have South Putnam ready to play tonight and that's my fault."

One bright spot for the Eagles was Drew Cash and their passing attack. Cash rushed for 103 yards on the night and when their passing game was good, it was really good. Edwards passed seven times for 164 yards.

When asked where the team goes from here, Burgess was clearing looking for a group of guys ready to roll up their sleeves and pick up their game, which he believes will produce some winning results.

"I'm going to come back tomorrow morning and go to work," Burgess commented. "We'll find out who shows up to go to work with me -- that's all we can do. We're halfway through the season, we have a lot of football left, and we got homecoming next week and another county school coming to town. We can either put our tails between our legs and say it's over, or we can come back and go to work.

"I know as a coaching staff, I'll be there tomorrow ready to go and we'll see who joins us and go from there," he said.

Greencastle will travel to North Putnam at 7 p.m. Friday, while South Putnam will host Cloverdale at 7 p.m.

Next game -- Greencastle will travel to North Putnam at 7 p.m. Friday, while South Putnam will host Cloverdale at 7 p.m.