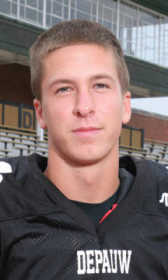 DePauw sophomore wide receiver Alex Koors caught eight passes for 220 yards in a 27-14 Southern Collegiate Athletic Conference win at Centre on Saturday and has earned the conference's Offensive Player of the Week honor.

His selection marks the second straight week a DePauw player has earned the distinction as quarterback Spud Dick was the league's top offensive pick last week.

His 220 receiving yards equaled the second-best single-game performance in school history and was the second best in SCAC (1991-present) history. Canann Factor of Trinity had 231 yards receiving against McMurry on Sept. 12, 1998.   Koors' performance also ranks as the most receiving yards in a game between two SCAC opponents. Five of his receptions were for 25 or more yards and four were for 35 or more yards.

DePauw is off to a 2-0 start and 1-0 in the SCAC. The Tigers host Sewanee in an SCAC contest on Saturday at 1 p.m.