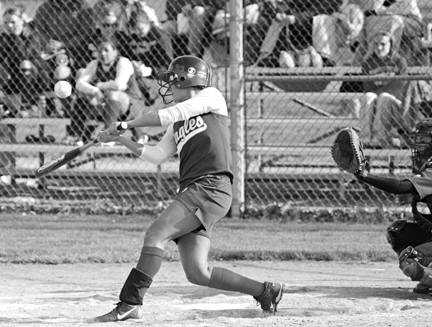 South Putnam's Meghan Canary batted .451 with 12 doubles, two triples and drove in 20 runs.?On defense she had a .977 fielding percentage.

Having led her team to a sectional championship and a 22-3 record in her senior year, South Putnam senior catcher Meghan Canary is the 2008 Putnam County Softball Player of the Year.

Canary was the Eagles' leader at the plate and in the field, as she was among the best offensive players around and one of the best catchers.

Behind the plate, though, Canary may have been even more impressive, as she had a .977 fielding percentage and managed a pitching staff with an ERA of just 1.31.

A junior shortstop and pitcher, Boetjer led the county with 26 RBIs while also scoring 22 runs. She batted .398 with 35 hits, 10 doubles, five triples and a home run. As a relief pitcher, she was 4-1 with nine saves. Boetjer fanned 72 batters in less than 53 innings of work and posted an ERA of 1.20.

Starting pitcher Tomasino finished the year with an 18-2 record and an ERA of 1.36. She struck out 73 batters in 123 innings of work. The leftie also made an impact at the plate, as she batted .350 with eight doubles and a home run. She drove in 13 runs and scored 13.

Center fielder Krystal Welch set the table for Canary and Boetjer at the leadoff position. The sophomore used her speed on offense and defense, as she often bunted for hits throughout the year. Welch finished the year with a .436 average, two doubles, two triples and 34 runs scored.

In a year that saw the program turn around to a 14-9 record and a county tournament championship, Greencastle also placed four players on the All-County squad in Cassie Alspaugh, Hannah Spencer, Mallory Miller and Briana Baker.

Spencer was the key to the GHS defense. The Tiger Cubs did an outstanding job of getting opponents to hit ground balls and let the defense make plays. No one made more plays than Spencer. At the plate, the leadoff hitter was second on the team with a .357 average. She had 34 hits and scored 20 runs.

The GHS pitching came largely from the freshman duo of Miller and Baker. Baker compiled an 8-5 record while surrendering a 2.13 ERA. She struck out 49 while yielding only 26 earned runs on the year. Miller had a 6-4 record with a 2.98 ERA and 65 strike outs.

At the plate, Miller and Baker tied for the team lead with 16 RBIs. Baker also had the Tiger Cubs' only home run.

For North Putnam, the story of the year was a freshman pitching sensation. Taylor Judy compiled a 13-9 record in 160 innings pitched. She compiled an astounding 227 strikeouts while allowing only a 1.05 ERA.

The star of the Cougar offense was sophomore catcher Dakota Malayer, who led her team in average (.343), on base percentage (.400) and led the county with four home runs. Malayer also drove in 15 runs.

For Cloverdale, sophomore catcher Martika Byrd led the county with a .462 batting average and a .647 on base percentage. Perhaps even more impressive, Byrd batted .520 in the Clovers' WCC games. She also doubled twice and drove in two runs.