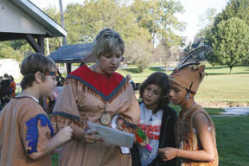 Jackson Kendall, Bradley Roe and Austin Daniels get instructions from Roachdale Elementary teacher Julie Black on how to play some of the games played by Native Americans.

Students dressed in authentic style clothing and learned Native American lore from traditional style storytelling, played Indian games like hunter and snake, had symbols painted on their faces and learned how to sand paint like the Navajo Indians from the Northwest.

They made headbands, masks and bracelets and learned about totem poles and calendar sticks during the daylong adventure. 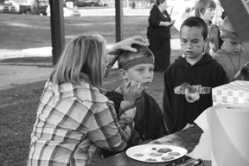 Tom Abner, father of fourth grader Kaelynn, kicked off the event with a demonstration of archery. He showed the students different types of bows and demonstrated shooting with the type of bow the Indians might have used.

Kaelynn also showed off her archery skills by hitting her target with all five shots.

"We usually luck out and have some parents who come in and show us a skill. This year we got Mr. Abner," said fourth grade teacher Jonathan Shannon who was dressed as a American Native.

"I went to Wal-Mart and bought a pattern and had a lady make it for me," said Shannon talking about his outfit. "Every year I try to add something to it. Next year I'm getting moccasins," he laughed.

Among the tribes that lived in Indiana are Miami, Illini and Shawnee. Those who migrated to this area include the Delaware, Iroquois, Kickapoo, Muncie, Nanticoke, Potawatomi and Wyandot.

According to the American Indiana Center of Indiana, there are currently about 2,500 Miami Indians who still live in the state. Another 5,000 members live in Oklahoma.

Many of the Miami Indians were forced to leave the state for Oklahoma during the Indian removals in the 1800's. The Miami Indians remain unrecognized by the government of the United States and dispossessed of their land today. The tribe is known for their quillwork, beadwork and embroidery.

The Miami's traded with all the other tribes of the Great Lakes region, and sometimes with tribes who lived further away. In the late 1700's the Miami tribe led a coalition of Great Lakes tribes including the Ojibwa, Pottawatomie, and Shawnee.

The students spent the entire day going to different stations set up and manned by teachers and volunteer parents learning about all types of Native American traditions and customs.

"A lot of the students and their parents really get involved," said Shannon. "They make their costumes and can usually use them for at least two years."

Music and Art Teacher Debbie Myers started the annual Native American Day 16 years ago. She is also responsible for the even older event for Roachdale Elementary fourth graders--Pioneer Day--that has been going on for 30 years.

"It's a good way to give hands-on activities to reinforce what we taught in the classroom," said Myers who taught fourth graders at Roachdale until a few years ago when she switched to music and art at the school.

Myers attended some workshops at the Indiana Historical Society and the idea for both Pioneer Day and later Native American Day grew out of the information she found.

Even now that she teaches all grades in art and music, she still finds herself involved in the annual events. Her art classes all made Native American artifacts like medallions. She even has a small wardrobe of costumes to loan out to kids.

"I even have a complete outfit of my own in my classroom right now. I didn't put it on today, but I sure thought about it. I miss going out for the fun," she added.

Myers also acknowledged how important the parent involvement is with these programs.

"We couldn't do it without the parents. They come and run the different events. We get everything prepared and the parents do the work on the day," she said.

"It's one of the greatest things we can do to get them to come in to help. We really appreciate them," she added.

Myers notes she has been around long enough now that she is seeing second-generation children participating in the programs.

"Kids tell me, my mom remembers Pioneer or Native American Day," she said.

For those parents who missed out on Native American Day, mark your calendars for the spring event--Pioneer Day for fourth graders is on May 8, 2009.