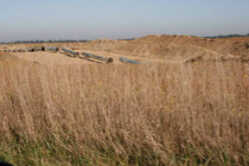 Rockies Express pipeline stretches for miles across the northern part of Putnam County. Just outside Bainbridge on U.S. 36, this pipe is waiting to go into the ground.

The Rockies Express--East (REX) pipeline is going into the ground in several locations in Putnam County. The 638-mile pipeline from Audrain County, Mo. to Monroe County, Ohio cuts across miles of farmland in northern Putnam County.

According to the Public Affairs office for REX, the project is on target across Putnam County and in Indiana.

The construction end of the project kicked off this summer in Putnam County. More than 500 crewmembers are in the local area for at least the next three months working on the project.

In August, crews moved into the area to clear rights of ways and begin laying pipe into trenches. There are several locations along U.S. 231 and U.S. 36 where progress on the pipeline can be viewed.

Among the reported benefits over the long and short term is the increased property tax that REX-East will pay for the pipeline and compressor stations. States also receive revenue from sales and use taxes during the construction.

With construction already under way, restaurants, hotels, motels and retailers should be seeing increased activity from the construction crews. In Bainbridge, Town Clerk Jason Hartman thinks there has probably been some impact from the additional people moving into the area.

"I know there have been a lot of apartments rented by the crews in the Bainbridge area. And the town has been selling water to them for a couple of months," said Hartman.

When the project is complete, the 42 inch-diameter steel pipeline systems will carry between 1.5 billion and 2.0 billion cubic feet of gas per day from the supply rich areas of Colorado and Wyoming to natural gas markets in the Midwest and Eastern United States.

The REX project is designed to fill a national energy need for the growing demand for safe, clean-burning natural gas. There will be a local distribution point in Putnam County when the REX Pipeline interconnects with the Panhandle Pipe north of S.R. 36 on the south side of 850 North.

Information about the REX pipeline can be accessed online at www.rexpipeline.com

REX spokesman Allen Fore said the project could be completed by the end of the year or early 2009, depending on the weather. Crews will continue to work in cold weather, but rain or extremely cold weather could cause a delay.

REX just received clearance from the Federal Energy Regulatory Commission on Friday to move into Franklin County next to Ohio. It was the last Indiana county awaiting approval for the project, Fore said.