When talking about the turning point in a game, rarely would one look to the opening kickoff. However, to talk to South Putnam coach Troy Burgess, he saw what he needed to see in his young kickoff team's coverage of the opening kickoff Friday against Cloverdale 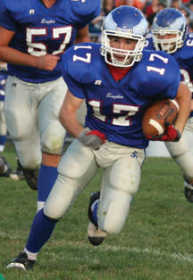 South Putnam senior Antonio Hernandez looks to make a move on a Clover defender after making a first-quarter reception. The Eagle offense racked up 311 yards on its way to a 76-6 homecoming victory.

But no one could have foreseen the final outcome, as the Eagles rolled over the rival Clovers 76-6.

Coming into week six, the two squads seemed to be teams headed in opposite directions. The Clovers (2-3, 1-2 WCC) had won two games in a row, while the Eagles (2-3, 1-2 WCC) had lost two straight, including last week's disappointing 10-7 loss to Greencastle.

But that all turned around on Friday.

The Eagles used a combination of forced turnovers and nice punt returns to begin all five first-half possessions in Clover territory.

It was the combination of turnovers and lack of effort on special teams that had Clover coach Kyle Winkler upset after the game.

"Tonight it was very obvious our kids came out flat. They jogged on special teams and turned the ball over in our end of the field too many times," Winkler said. "When one team's going 100-percent and the other team's jogging, that's what the scoreboard indicates."

The Eagles had only 28 yards to go on their first drive, which ended with a three-yard Derek Tomaw score to put them on top. The Jake Gould kick put them up 7-0 with 8:57 to play in the first.

On their next possession, Drew Cash scored on a 21-yard run and Gould's kick made it 14-0.

The next three possessions were more of the same, as South took possession at the Cloverdale 41, 24 and 19. The results were also the same, with a Trent Knight five-yard run, a Dayne Nelson 27-yard catch and a Hunter Edwards one-yard dive for three more touchdowns.

In the midst of this, though, the Clovers showed their one real sign of life on the night.

With South Putnam up 21-0 early in the second quarter, Cloverdale embarked on a 16-play, 72-yard scoring drive that took nearly seven minutes. Dillin Gray bore most of the load, rushing seven times for 40 yards. Senior fullback Sam Spinks took the ball the final yard for the one-yard score.

But even the extra point wouldn't come easy, as they could not get the snap down, and failed to convert on the pass attempt.

After the second-half kickoff, the Eagles began their first drive of the night in their own territory. The distance didn't matter, though, as they went 68 yards on 11 plays before Hank Goldman scored on a two-yard run.

With the score 42-6 with 6:36 to play in the third, it looked like time to call in the reserves. Nobody would have anticipated two straight defensive scores, though.

The first came when Clover backup quarterback Jordan Brinkman fumbled in his own end zone and Chris Hurst jumped on the ball for a touchdown. South now led 49-6 with 4:58 left in the quarter.

About a minute later, Hurst came up big again, this time with an interception off a tipped pass that he returned 51 yards for another touchdown and a 56-6 lead. 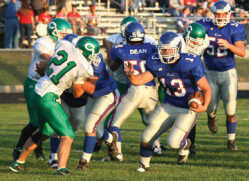 South Putnam senior Derek Tomaw carried the load for the Eagles on this first-quarter drive, carrying the ball seven-straight times for all 28 yards and the score.

The Eagle staff had no intention of pouring it on like this, but the ball kept bouncing their way on Friday.

"Let's face it, I've been on the other side and a lot of times things just tend to snowball. Block punts, fumbles -- it snowballs on you. You hate that, but you can't tell your kids not to play hard," Burgess said. "We had all of our young kids there in the fourth quarter. Everybody played."

Early in the fourth, the Eagle special teams, and Hurst, came up big again. Knight blocked a Cloverdale punt, and Hurst returned the ball 15 yards to the Clover six. Two plays later, Braden scored on a five-yard run.

The final South Putnam score came as with 2:18 to go and the Eagles trying to run out the clock. Freeman took the ball on a simple run play, but broke into the open for a 60-yard score.

The game ended with at 76-6, and two coaches in very different places.

"We played 48 minutes of football as hard as I've seen these kids play. You have to give these kids a lot of credit," Burgess said. "After a tough week like last week, it's easy to get down, and our kids didn't. They regrouped this week and had a great week of practice and just did a super job tonight."

Winkler and staff were scratching their heads a bit, but they are ready to move forward. The task is finding out which players are up to the challenge.

"We'll get it figured out. We'll get 11 kids on the field who want to play four quarters. If it's gonna be a freshman quarterback, a freshman kicker, I don't know; we'll have somebody out there who wants to go full speed," Winkler said.

For South Putnam, though, this was a turnaround from a disappointing first half of the season. After defeating Owen Valley in week one, they had lost four straight. Burgess hopes this is a better indication of where the season will go from here.

"Hopefully things can continue to be positive off of this. Any time you get an win against a county team, a homecoming win, it's a big win for us," Burgess said. "I'm very, very proud of our kids, and hopefully this gives us a little bit of momentum going into the second half."

Cloverdale hosts Greencastle in another county clash at 7 p.m. next Friday. South Putnam visits Speedway at 7 p.m. on Friday.