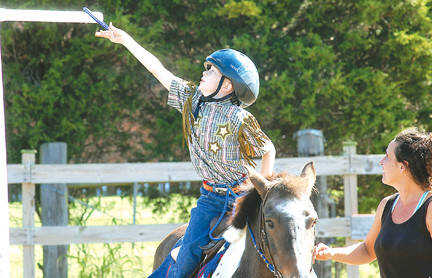 COATESVILLE -- An intense Chris Wells rode his horse through the trail course at Hope Haven Horse Farm Saturday, removing rings from one pole and slipping them onto another during Western trail class.

At the end of the course, a triumphantly Wells -- one of 12 contestants at the first-ever Hope Haven Showcase -- pumped his fist in the air and waved to the cheering crowd, his smile lighting up his entire face.

Wells and several of his fellow Hope Haven clients competed in the show, which was developed by the facility's executive director, Christy Menke, as a way to make sure those clients who were not able to participate in Special Olympics this year would have a chance to show off the skills they had learned at the therapeutic riding center.

The clients of Hope Haven Horse Farm spend months in the arena in rural Coatesville learning how to mount and dismount and achieve the correct riding position. They perform dozens of different exercises and work on such basics as holding the reins, guiding their horses and giving verbal commands.

They work on their balance, coordination, comprehension and relaxation.

This year, due to changes in national rules, Hope Haven was unable to take as many horses to the Special Olympics as they had in the past. Only two Putnam County riders from Hope Haven were able to participate.

To give those riders a chance to be a part of a show, Menke decided to organize one of her own.

"The kids are just having a great time," said Delma Klindt, a volunteer at Hope Haven.

Members of the Madison Township Fire Department helped out by watering down the ring and assisting in events.

"Everyone got a championship trophy in a class they were in," Menke said. "When one of the girls got her trophy, you would have thought she'd won the Emmy. This was one of those things that makes you realize how simple life is supposed to be."