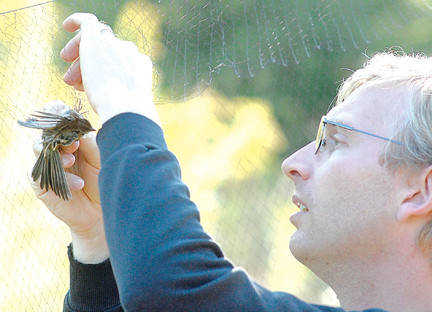 It was a bright, sunny morning on Saturday, and Andy Zuwerink, assistant professor of biology at DePauw University, was busy banding birds at the university's nature park.

"You can use banding for a number of things," he said. "It can be used to determine populations or track migratory patterns."

Bird banding is a system used by researchers all over the world to help them identify individuals of a species.

The bands are small, lightweight pieces of aluminum that are closed like a bracelet around one leg of the bird. They don't hurt the birds or affect how they fly, and most birds don't even notice that they are there.

Each band is etched with an individual number to identify the bird as an individual (no other bird in the world has that number).

Zuwerink catches his birds in lightweight mist nets, which he had set up in three different locations on Saturday.

"It's actually better to do this on a day when it's a little overcast, because when it's sunny like this the birds can see the nets better," Zuwerink said.

The birds fly into the nets and fall into pockets where they are cradled until they are extracted.

The birds are then banded and measurements are taken.

Sex and age are recorded if they can be determined.

Wing cord -- the length of the wing from the tip of the shoulder to the longest feather -- is also taken. This measurement can be helpful in determining what sex the bird is.

Finally, the bird is weighed before being released.

Zuwerink said a large majority of the birds he bands at the nature park are Goldfinches. He also sees a lot of Sparrows, Chickadees, Nuthatches and Titmice.

Zuwerink said several of his students are interested in helping him with bird banding.

The public is welcome to come see Zuwerink in action. He will be banding birds every Saturday through mid-November at the nature park's amphitheater from 7 to 11 a.m.